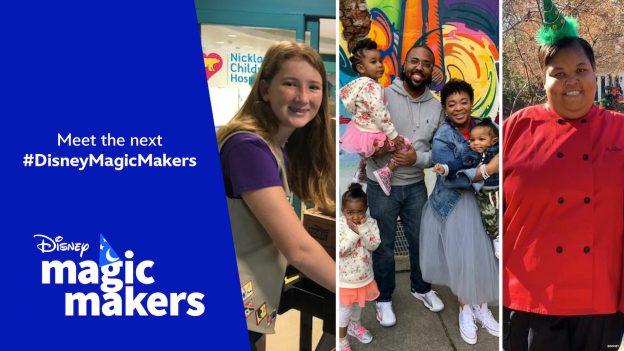 While the last year and a half has been a challenge for many, people across the country have stepped up in remarkable ways. Physicians went beyond the call of duty to make sure their patients felt safe in a time of uncertainty; high schoolers put aside their after-school fun to assist elderly members of their community, and neighbors from every corner of the country answered the call to help so that no one in their neighborhood was left behind. The Disney Magic Makers contest was created to shine a light on all of the people whose good deeds spark everyday magic.

Magic comes in all shapes and sizes, from sincere and simple acts between neighbors to massive acts of kindness and generosity. To honor their contributions, Disney searched the nation to find 50 amazing Disney Magic Makers and rewarded them with a trip to Walt Disney World Resort in celebration of its 50th anniversary and a one-year subscription to Disney+.

The 50 Disney Magic Makers chosen reminded us that we all have the power to make a difference. The friendship of two women in Ohio sparked a vaccine revolution for elderly and at-risk members; local heroes in Utah, Illinois and California showed that the good deeds of one person can affect an entire community; a high schooler in Ohio and a college student in Rhode Island proved that one is never too young to bring awareness to a cause; the Muppets’ slap-stick quipster Fozzie Bear even received a nomination for bringing magic to his peers; and in celebration of the inaugural World Princess Week, we discovered women from all corners of the nation whose acts of service embody the temperament of a Disney hero. And that was just the tip of the iceberg.

Today, Walt Disney World Resort kicks off the 50th celebration and new Disney Magic Makers have been chosen for their work in changing the lives of people in their community.

James Gordon works as the principal of Oak Grove/Bellemeade Elementary School where he serves predominantly Black families in southside Richmond, VA. To ensure no family went hungry, James organized food drives and distributed full turkey meals to families during Thanksgiving for over three years. In addition, James developed the AAA program (Attitude, Attendance, and Achievement) with the goal of encouraging students to strive for excellence. But his most prominent contribution is awarding five elementary school students from low-income families with full scholarships to Virginia Union University, an HBCU in Richmond.  Disney was so inspired by James’ goodwill that we brought him to Walt Disney World Resort to surprise him with the news that we’ve donated an extra $50,000 to his college fund to help him continue the good work.

We’ve always believed that our cast members were the original magic makers, and Chef Ashley Keyes of Atlanta, GA is a former culinary intern who continued to spread magic long after she left Disney. Ashley’s passion in life is to feed and serve people and she is now the Executive Chef for C.H.O.I.C.E.S. (The Center Helping Obesity In Children End Successfully, Inc.) where she offers free cooking classes for families in and around her community. Ashley also hosts mobile food distributions. Since the pandemic, she has passed out 20,000 pounds of food to over 500 families each month!

Lauren Page of Miami, FL felt all children should have access to literature. She founded Page by Page and has so far distributed over $1.5 million worth of books to more than 450,000 underprivileged children around the world. In May 2020 during the pandemic, Lauren delivered over 30,000 books to the doorsteps of children who were at home with no internet access and provided books for the public to take at COVID-19 test facilities.

These Disney Magic Makers, and the thousands whose stories have yet to be heard, all had one thing in common: they wanted to help. Though the contest has ended, the footprint these individuals have left behind will inspire communities for years to come.