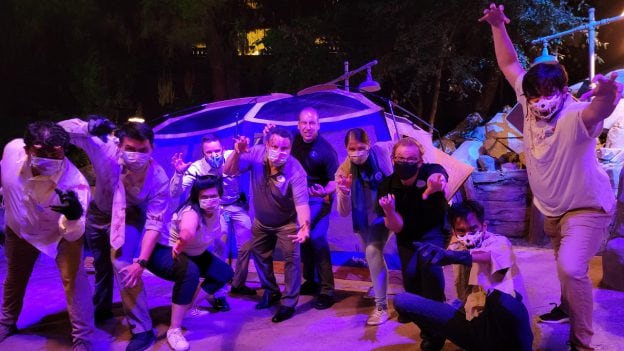 Giddy screams and excited shrieks aren’t unusual during Halloween Time at the Disneyland Resort, but this week, the loudest screams were coming from cast members at the after-hours Scare Maze in Disney California Adventure Park!

The cast-only event on Oct. 6 helped cast members get in the Halloween spirit with treats, games and a moonlit maze complete with jump scares and plot twists.

A team of 40 volunteers spent two months planning and organizing the event for more than 600 attendees. “This event is 100% produced by the cast, for the cast,” said Patrick Finnegan, senior vice president of Operations for Disneyland Resort.

Tommy Metzger, who works in Avengers Campus Attractions, stepped outside of his normal role to develop the storyline, theming, costuming and other elements to bring this event to life.

“I love that anyone can be a part of this,” said Tommy. “It doesn’t matter where you work or what you do — you don’t have to audition or interview or stress in any way. You can just come do something fun that you genuinely want to do!”

This thrilling event has taken place for several years — making an elaborate return after last year’s hiatus during the resort’s closure. This year’s story and theme focused on a mysterious creature haunting the campgrounds and surrounding forests in Redwood Creek Challenge Trail. Volunteer actors helped set the scene inside and outside the maze with professional special effects and makeup; Main Street Merchandise Host Jonathan Granados, who is also a professional makeup artist, applied gory makeup and prosthetics to the performers.

Anthony Olivares, Attractions host, who has been helping run the event for four years, said: “Every year we try and tell a different story through theatrical elements in the maze.”

Entertainment Host Forrest Orta has helped run the event for more than five years. This year, he helped create custom logos and packaging used as props.

“It’s important for cast members to get the same immersive, high-quality experience our guests receive each day,” said Forrest. “When we’re just working our same role each day, we might miss the full magic; I wanted cast to once again fall in love with why Disney does what it does.”

Organizers prioritized inclusion in their plans; the event was completely wheelchair accessible to allow all to participate and get the same immersive experience.

“There’s really something for everyone,” said Baby-Jo Fernando, an Avengers Campus Attractions host. “Even the cast members who don’t like to be scared could come get treats and spend time with other cast members.”

Event volunteers are already talking about how to make next year’s maze better (and scarier) than ever!

“Cast events are what make this job so unique and special,” said Rachel Kahan, Avengers Campus Attractions. “It really speaks to the community we have that so many people just say, ‘hey, let’s all do this together for each other.’ It boosts morale in a way I just can’t describe.”

For more #DisneyCastLife tricks and treats from this event and more, check out Disneyland Resort Cast and Community on Facebook and Instagram.