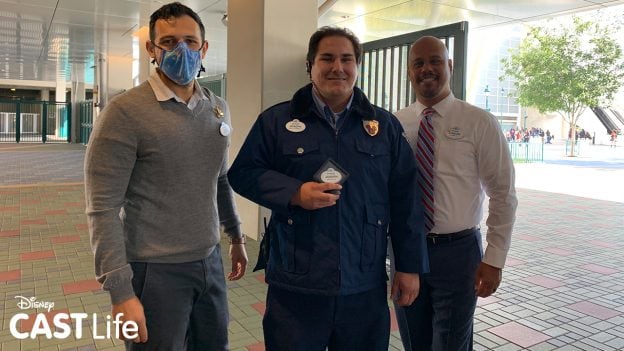 Disneyland Ambassador Justin Rapp recently surprised a few cast members with their nametags to thank them for all their efforts and dedication to reopen the resort. For many cast members, this nametag symbolizes a hopeful new chapter in the resort’s history.

Security cast member Joseph Romo has been with the Disneyland Resort for 12 years but his role changed drastically when the resort closed. Joseph was part of a small team that kept the resort safe and secure when the theme parks were empty and the gates were closed.

“To have everybody back, to have the teamwork that we have, the management team that we have and to have the cast bringing back the magic has just been a wonderful experience,” said Joseph. “Words cannot describe the emotions.”

For Linda Maglione, a cast member in costuming, returning to work has helped her regain a sense of normalcy and has instilled a sense of purpose in understanding how her role has helped with the resort’s reopening.

From maintaining the magic during the closure to bringing back the magic during reopening and continuing to make it for our guests and each other each day, thank you to all the cast members for all that you do.