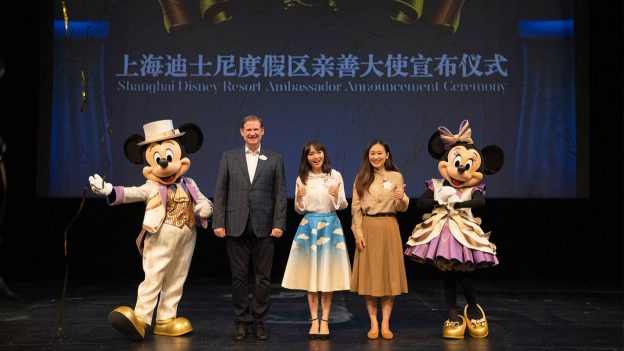 Today, Shanghai Disney Resort announced the 2022-2023 Ambassador Team: Phoebe Jiang and Witty Zhang. During their two-year term – beginning Jan. 1, 2022 – Phoebe and Witty will continue the legacy of the Ambassador program by representing Shanghai Disney Resort, leading our cast members to bring love and care to children and families, make lasting positive changes within the community and sharing Disney magic and happiness with more people! Congratulations, Phoebe and Witty!

Earlier this morning, we held an announcement ceremony with our cast members and Imagineers at the resort’s Walt Disney Grand Theatre to welcome the new Ambassadors.

Phoebe currently works in Park Operations on the guest services team at Shanghai Disney Resort. As a frontline cast member, she has delivered Disney’s legendary service to thousands of guests and helps create magical memories each and every day. Phoebe is also a member of the Disney VoluntEARS Leadership Council. Upon learning that she was elected as a new Ambassador, Phoebe reacted by saying, “It’s a huge honor and surprise to be elected as a new Ambassador as our resort is celebrating its Fifth Anniversary with a Year of Magical Surprises! As a Disney Ambassador, I look forward to working with my fellow cast here at Shanghai Disney Resort to bring happiness to more guests and communities in the future!”

Witty is a cast member in the resort’s entertainment team. In 2018, she joined Shanghai Disney Resort with dreams to become a Host, bringing happiness and surprises to guests. Witty was moved to tears upon learning that she was selected as a new Ambassador, “It’s been a dream of mine for three years and it finally came true. Thanks to each and every cast member who supported us along the way to help us learn and grow. I hope that during my Ambassador term, I will be able to create more exciting journeys for guests and cast.”

Shanghai Disney Resort has selected three Ambassador terms since 2015. The current Ambassador team, Fiona Huang and Eleven Song, are about to end their three-year term. We also invited all the former Ambassadors – 2015-2016 Ambassador Jennie Xu and 2017-2018 Ambassador Team: Chloe Zhou and Natalie Yao – to the ceremony and captured an incredible “Ambassadors Assemble” moment.

All of the Ambassadors – who have brought countless magical moments to cast, guests and the community with sincerity and warmth – look forward to witnessing the creativity and new experiences of their successors in the coming years.

For over 50 years, the Global Ambassador program has embodied the heritage and legacy of Disney Parks worldwide. First started by Walt Disney himself in 1965, the program has become a global success, attracting passionate cast members to act as representatives of their respective resorts both internally and externally and to serve as emissaries of goodwill—sharing the magic, inspiration and optimism of Disney.