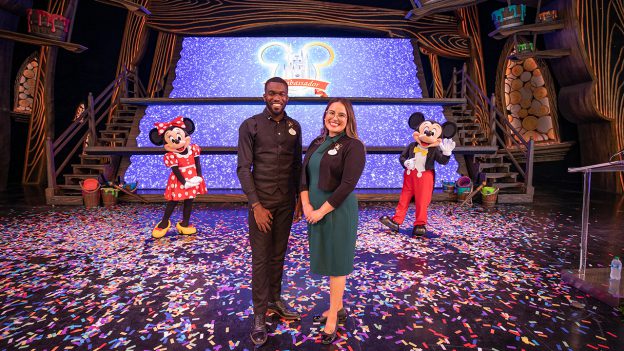 “Heartfelt congratulations to Mark and Nataly,” said Ken Potrock, president of the Disneyland Resort. “I am thrilled to welcome our amazing new Ambassadors, who will take on the role of a lifetime representing our cast and bringing Disney magic to our community. I look forward to spending time with Mark and Nataly as we roll out the many exciting things coming to the Disneyland Resort over the next two years.”

As Disney Ambassadors, Mark and Nataly will represent thousands of Disneyland Resort cast members making magic alongside them, leading and participating in cast events, sharing cast member stories through social media, and representing the resort in media interviews and community events.

Currently, Nataly works in Guest Relations and is a VIP hostess. In 2010, she started her Disneyland Resort career at World of Disney. She’s also been a Traditions assistant and Disney University facilitator. She enjoys photography, drawing and painting and is a big fan of all things Star Wars.

“I’m overwhelmed and honored,” Nataly said. “Being a representative of all of the cast members — that alone is such an honor.”

Mark is currently a stage manager in Disney California Adventure Park Attractions. He started his Disneyland Resort career in 2013 in Food and Beverage, was a test and adjust project lead in Avengers Campus and a facilitator for Step into the Magic. He volunteers in youth mentorship programs and his hobbies include fashion, fitness and, of course, going to theme parks.

“I think that the past two years and everything that’s been going on in the world just showed me that I love our cast,” Mark said prior to the announcement. “They deserve to be highlighted and consistently advocated for and empowered.”

Mark and Nataly will serve as the Disneyland Resort team but are joining a truly global team, as there are Ambassadors at every Disney Park around the world. They will begin their roles on Jan. 1, 2022.