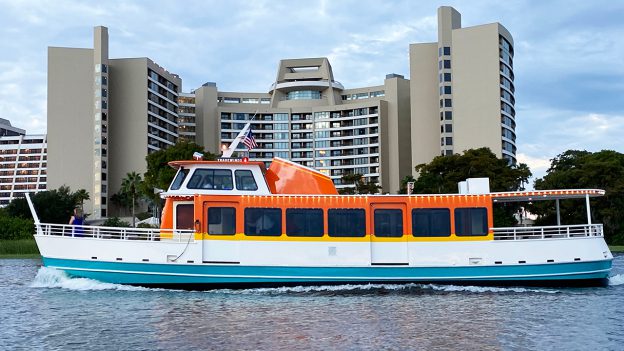 When thinking of Bay Lake and Seven Seas Lagoon at Walt Disney World Resort, I immediately picture the amazing Disney Resort hotels that line their shores, or the iconic ferryboats that transport guests from the Transportation and Ticket Center to Magic Kingdom Park. But recently, I learned the area is also home to a small (but mighty!) fleet of motor cruiser boats, which have been sailing those waterways since the 1970s. Now, just in time for the 50th anniversary of Walt Disney World, a new cruiser has joined the fleet, and its story is pretty incredible.

The cruiser is called Tradewinds, a name that was chosen by Walt Disney Imagineering and voted on by watercraft cast members. “Trade Winds” refers to the nearly constant wind that blows across the equator. And it’s the perfect name for this new vessel, since watercraft cast members have constantly delivered remarkable guest service across Bay Lake and the Seven Seas Lagoon since the fleet was launched.

But the name isn’t the only thing that cast members helped to choose. Watercraft cast members offered feedback that directly impacted the design of the vessel, from the position of the pilot house to the amount of cabin space available to guests.

“We solicited feedback from cast members about the things they would like to see in a new motor cruiser, and we put it into the boat,” said Transportation Guest Experience Manager Collin Garton. “Everything about it was made to make cast member input a reality.”

The small adjustments that make Tradewinds stand out among the other three motor cruisers in the fleet make a big difference to both the cast and the guest experience.

“It’s a great addition to the fleet,” said Billy Carter, a Transportation Engineering Services cast member who made sure everything on the boat was primed and ready to go before its launch. “Everybody is really proud of it. I think it’s going to go over big time with the guests.”

Guests can identify the new motor cruiser by its bright orange, yellow, white and teal coloring – also selected by the cast.

Before Tradewinds made its maiden voyage, cast members gathered together to christen the boat, a nautical tradition. It’s the first new motor cruiser to join the fleet in nearly 30 years, so the excitement at the event was palpable.

“It’s a big thing, and the boat looks sharp,” Billy said. “Everybody’s done a great job on this one.”

“This is a really big deal for our cast,” Collin agreed. “The last time we had an addition to our Resort fleet was 1993. The fact that we have this new vessel is huge.”

“The project team on this boat has been amazing,” said Greg Klesaris, the Facility Asset Management Project Planer in charge of Tradewinds. “From Transportation Operations to our engineers, everyone has come together to get the job done, and it’s been really great getting to collaborate with all of these people.”