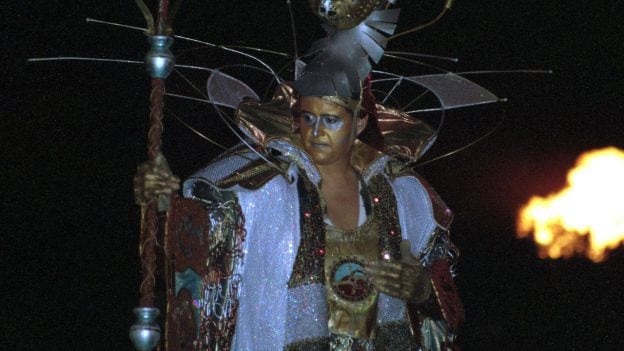 “Behold! The great Millennium walk.” Those booming words from the Sage of Time echo in my head more than 20 years after the debut of “Tapestry of Nations” at EPCOT. Created for the Walt Disney World Resort Millennium Celebration, this spectacular parade took place nightly around World Showcase Lagoon. It is by far my favorite parade ever created for a Disney park, and I spent countless evenings capturing performances on film. Recently, I scanned those negatives and wanted to share some of my favorite memories with you.

According to Pam Brandon’s “Marking the Millennium – The Celebration of a Lifetime at Walt Disney World Resort,” the parade was in development for three years. Originally conceived as a show called “Carnival of Giants,” the working title evolved from “Millennium 2000,” then “Earth 2000,” then “Tapestry of Dreams” (a name later used when the show continued during the “100 Years of Magic Celebration”), before landing on the perfect “Tapestry of Nations.”

During the show, millennium drums served as a human heartbeat while guests were transported on a spiritual journey with larger-than-life puppets set to an emotional score.

The concept clicked for me, as there were many times I found myself lost in the moment, drumming along to the music while performers danced on the World Showcase promenade with 20-foot-tall aerial rod puppets. I think my favorite puppets were the futuristic Hammered Man or the gangly Disc Man.

Award-winning designer Michael Curry brought the puppet designs to life, and a crew of 50 worked for over a year creating 120 puppets for the show. There were 40 different styles, three of each design with names like Bird Man, Wiggle Girl, Aztec Man, Inverted Marionette, Angel Girl and the Sprite.

Thirty drummers pounded giant rolling clocks in time to a breathtaking score composed by Gavin Greenaway. He said the soundtrack “communicates a feeling of oneness, of belonging, with many cultures and people together.”

Music was recorded at Abbey Road in London with musicians from the Royal Philharmonic and the London Symphony Orchestra, and a 30-member chorus. Even now as I write this article while listening to the soundtrack, I’m moved to tears, as the music is filled with such hope and optimism.

I extend a sincere thank you to the cast members who spent many hours bringing this show to life. Throughout my career, I’ve met many people who adore “Tapestry of Nations” as much as me, and it’s always an instant bond we can share.

This is just one of the countless indelible memories from my years at The Most Magical Place on Earth. I’ll continue to share more here on the Disney Parks Blog as part of our ongoing celebration of the Walt Disney World Resort 50th anniversary. You can also follow #DisneyWorld50 on social media channels to become part of the conversation!