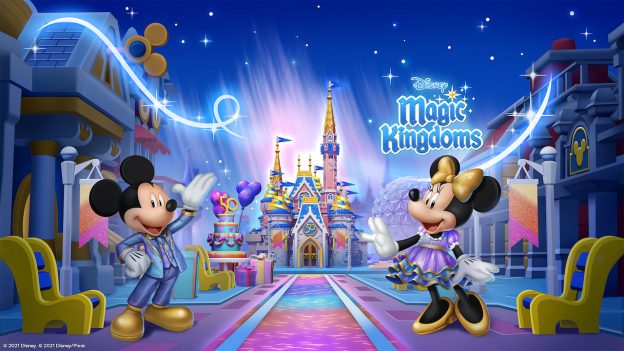 Wish you could take some of the Walt Disney World Resort 50th anniversary celebration magic with you on the go? Well, look no further as Disney Magic Kingdoms, a fun mobile game where players can build their own Disney-inspired park, goes all out starting October 5. Join over 80 million players worldwide who have embraced their inner child by playing this magical game! Witness the Castle and Main Street transformations inspired by Walt Disney World Resort 50th Anniversary EARidescent logo and banners.

Participate in the upcoming Tapper Event with Figment the dragon taking place Oct. 7 – 10. Tapper Events require you to tap on small items that pop up throughout your Kingdom. Be sure to search your Kingdom for Figment hanging around! The more Figment the dragon you collect, the more prizes you can win, from Concessions Chests to the Mickey Topiary decoration. At the same time from Oct. 7 – 14, players can partake in the “Striking Gold” Collection Event. During this event, players must find gold trophies hidden throughout the Kingdom by collecting them from attractions and character activities. Players will be able to win everything from the Walt Disney World Resort 50th Anniversary Hat Stand to the Walt Disney World Resort 50th Anniversary Gold Trophy! Last but not least, from Oct. 11 – 14 there will be another Figment Tapper Event where players can win Resource Chests and the Mickey Mouse Walt Disney World Resort 50th Anniversary Celebration look!

Disney Magic Kingdoms is a free-to-play game with in-app purchases available on your phone or tablet. Click here to install today!