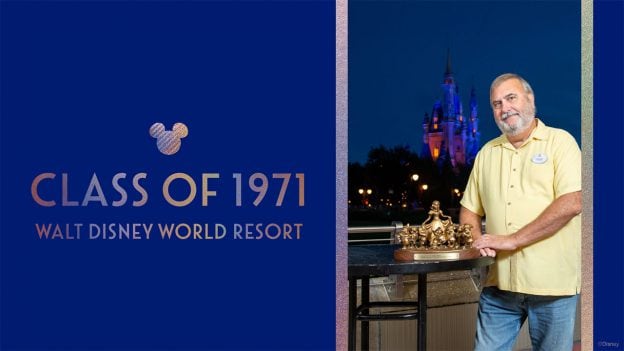 Chuck’s role began even before Walt Disney World Resort opened. “My first job at the warehouse was to haul drywall through the Magic Kingdom tunnels because it was just iron work underneath at the beginning. There were no rooms, I could see one end to another,” Chuck said.

During the early days of his career, Chuck tells us he had a front-row seat to how the Resort was growing and impacting the expansion of Central Florida. “There were many citrus groves and cow pastures as this was a rural community. As the company grows, [so do the] diverse communities with lots of different diverse people that make up all cast members.”

Chuck eventually moved from working on Cinderella Castle to his current role of keeping the Resort operating smoothly. Whether it’s helping supply hand sanitizer stations to different locations at the Resort or shipping special wheels to the Seven Dwarfs Mine Train attraction at Magic Kingdom Park, Chuck delivers the Magic!

When asked about opening day in 1971, Chuck recalled the moment he was featured on the timeless LIFE magazine cover. “Opening day was pretty busy for most people in the parks, but in the backstage areas—where I worked—it was just like a normal day. When it was finally time for the LIFE magazine photo, they brought in 1,500 cast members from different areas in the parks and told us where to stand. I am one of the many cast members in white standing in front of the castle.”

As Chuck continues his work in Procurement Services, his 50 years working at Walt Disney World is something he’s immensely proud of; working beside some of the finest cast members whose talents, dedication and commitment to excellence is recognized by both cast and guests.