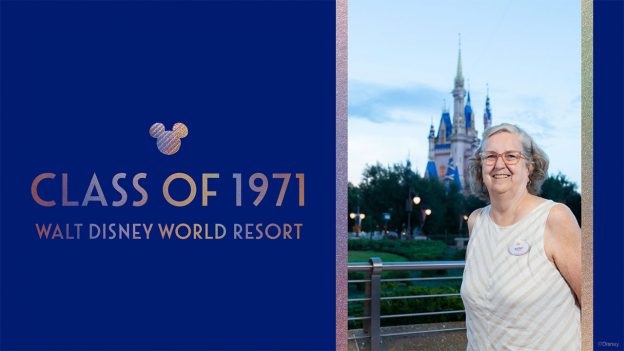 Kathy has been a cast member at Walt Disney World Resort for over 50 years. She started as a merchandise hostess on Main Street, U.S.A. selling film and flashcubes, and half a dozen roles later, she’s now working as a secretary at Disney’s Fort Wilderness Resort & Campground. “I’ve gained skills that I never would have developed elsewhere,” said Kathy. “There is always a focus to become a better ‘me’ in every aspect of my life.”

Kathy’s called Disney’s Fort Wilderness Resort & Campground her work “home” for quite some time. “Fort Wilderness is a special place for me since it’s one of the first places I worked [while at Resorts],” Kathy reminisced. “I’ve seen it grow over the years and have seen guests come back year-after-year. I love coming down to the Settlement area—where we have the Trading Post and Pioneer Hall—because this used to be the center [of the campground] when first opened. I feel like I’m back where I belong and back where I started.”

When asked about her favorite memory, Kathy smiled and mentioned, “I have hundreds of memories but my all-time favorite was opening Main Street, U.S.A. in 1971. It was at a very early hour, so early it was still dark and foggy, but as I walked up to admire the castle, the sky behind it was totally black, spotlights had perfectly illuminated the castle, and because of the fog there were all these rainbow sparkles around the castle. A group of us just stood there to watch the sun come up and turn the castle pink.”

Kathy recalled that she never thought she’d work here for this long, but as each year passed with each monumental anniversary, she was determined to keep working for a company that she adores and calls home. “If I were to name my closest friends, they are all connected to Disney. There are people that I’ve known for 40+ years, and we still get together to this day.” Kathy even mentioned that one of those friends lives all the way across the country in California, and although they’ve only met once in-person, she is her closest friend.

“I honestly cannot believe it’s been 50 years here at Walt Disney World. I can still remember walking onto Main Street, U.S.A. for the first time, hearing the music, seeing the lights and even the scent of peanut brittle being made in the [Main Street] Confectionary. I still love standing in the middle to watch and listen to others enjoying the magic around them.”

When it comes to keeping the magic alive, Kathy shared how much she loves helping guests make a special memory that they can tell others about. “The real magic of Disney is sharing it with others.”