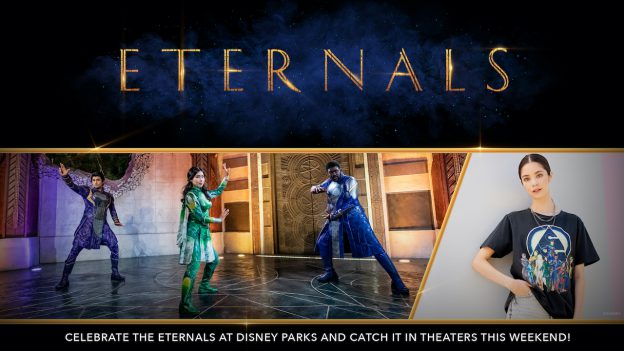 Celebrate Eternals, Super Heroes Centuries in the Making, in Theaters and at Disney Parks

The countdown is over; “Eternals” is now playing in theaters! This epic new adventure features a new team of Super Heroes in the cinematic universe, ancient aliens who have been living on Earth in secret for thousands of years. An unexpected tragedy forces them out of the shadows to reunite against mankind’s most ancient enemy, the Deviants. You can catch the movie from Academy Award-winning director Chloé Zhao in theaters this weekend, and read on to learn about other ways to celebrate “Eternals” at Disney Parks in the U.S.!

If you’re visiting Disneyland Resort or Walt Disney World Resort this weekend, you’re in for a real treat. For a limited time, you can get a glimpse of scenes from “Eternals” for an in-park experience that also features a display of some of the original costumes used in the production of the film. How cool is that? At Disney’s Hollywood Studios, it’s part of the Walt Disney Presents attraction, while guests at Disney California Adventure park can check it out at the Sunset Showcase Theater in Hollywood Land.

At Disney California Adventure park at Disneyland Resort, Avengers Campus attracts heroes from across the universe … and even those who have been living on Earth in secret for thousands of years. Starting TODAY, guests exploring at Avengers Campus may find themselves in the company of Eternals, experiencing a heroic encounter with the legendary Sersi, Kingo, or Phastos.

Also launching this week is the Eternals: AR Story Experience! This immersive augmented reality adventure you can enjoy at home allows you to step inside the film with Sprite, an Eternal, to discover the truth about humanity. You can enter the world, learn the backstory, and meet the characters, in this immersive story experience. Download the Disney Movie Insiders app and launch the experience now, only on iOS*, before you watch the film in theaters.

Ready to rock the look of a Super Hero/ancient alien? Your look will be forever elevated by the Eternals in this T-shirt, featuring their dramatic metallic film logo, or this T-shirt, featuring the band of immortal aliens tasked with protecting Earth from the Deviants. If you’re feeling powerful but still need to stay warm, this Ikaris reversible jacket was made for you. Inspired by tactical leader and the most powerful Eternal, Ikaris, it features a gold pattern designed after his uniform, with a twill reverse featuring an embroidered “E” logo on the chest. These eternally awesome items are available at Disneyland Resort, Walt Disney World Resort, and shopDisney.com.

So, go ahead and get your Super Hero look on and don’t miss “Eternals,” now playing, only in theaters.

Likes (5)
Share Celebrate Eternals, Super Heroes Centuries in the Making, in Theaters and at Disney Parks