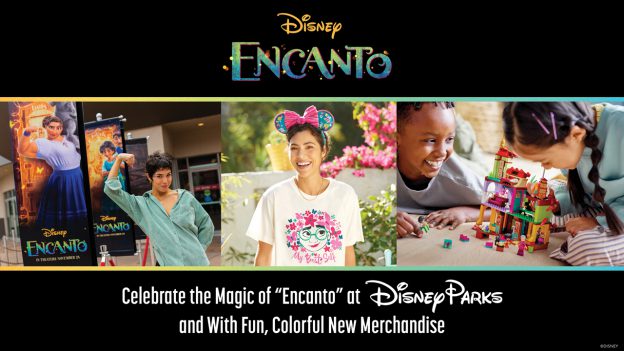 Celebrate the Magic of ‘Encanto’ at Disney Parks and With Fun, Colorful New Merchandise

I don’t know about you, but my family always had the tradition of going to a movie on Thanksgiving weekend, and this year will be no different! Today, Walt Disney Animation Studios is releasing their 60th— yes, 60th! — animated feature film, “Encanto,” and it’s the perfect movie to catch this holiday weekend. This musical comedy tells the tale of an extraordinary family, the Madrigals, who live in a magical house in Colombia in a charmed place called an Encanto. Every child in the family is blessed with a unique gift, except for Mirabel. When she discovers that the magic is in danger, Mirabel might be her exceptional family’s last hope. I’ve rounded up some fun places to celebrate this exciting new film at Disney Parks, as well as a few ways for you to take home some “Encanto”-inspired magic!

If you’re close to Disney Springs, you’ll definitely want to check out the film at the AMC Theater there. Enjoy the “Encanto” red carpet experience with a beautiful display featuring fun photo opportunities for the whole family! Plus, what better place to see “Encanto” than at AMC at Disney Springs during the Holiday season?

When you make your way to Disney Springs to catch the film, be sure to arrive early so that you can “ooh” and “aah” over four all-new art displays near Jaleo and AMC Theater. Make sure your phone is charged, because these walls are the perfect background for some Insta-worthy photos! Guests can find another treasured piece of the art collection at Disney’s Animal Kingdom Theme Park near Creature Comforts on Discovery Island. Be sure to say “hola” to the Cotton-Top Tamarins, a native animal to Colombia, near the art display!

Everyone is getting in on the “Encanto” fun at Disney Springs! One of the film’s stars, Jessica Darrow, who lent her voice to the character Luisa Madrigal, recently stopped by to celebrate the film’s release and to check out these new art installations. Check out how Jessica enjoyed her visit and seeing the film come to life around Walt Disney World!

Over at Disneyland Resort, the holiday season is underway! This year, we’ve added new fun to the celebration at Disney California Adventure park, with special appearances by the lovable, funny Mirabel herself. With her story set in Colombia, she brings a new cultural perspective to the immersive, Mexico and Brazil-inspired “Disney ¡Viva Navidad!” festivities at Disney Festival of Holidays, with live entertainment and interactive photo opportunities. Treat yourself to a delicious arepa con queso and jam out to authentic Colombian music from the band El Sabor Bueno, appearing twice a week at Paradise Gardens Bandstand.

You’re sure to walk out of the movie singing its catchy tunes, so get the Mirabel Singing Doll to sing along with you! Available now on shopDisney and coming soon to Disneyland Resort and Walt Disney World Resort, press the button on the doll to hear her sing “The Family Madrigal,” one of celebrated songwriter Lin-Manuel Miranda’s songs from the film.

Once you’ve seen the film and fallen in love with the characters, you’ll want to emulate their style in attire like Mirabel’s ”My Best Self” T-Shirt… And we all know that no Disney look is complete without an ear headband! The Encanto Minnie Mouse ear headband features embroidered flowers, a striped bow with pom center and ”magic awaits you” text along the side. Little ones looking for colors that pop will love this Encanto dress with colorful allover print and puffed sleeves. There is nothing ordinary about this fun frock! All of this apparel is available now at Disneyland Resort, Walt Disney World Resort, and online at shopDisney.com.

Starting December 1, the LEGO Store at Downtown Disney District at Disneyland Resort will have some magical, exciting offerings, too. Unlock a micro-world of fun! With Antonio’s Magical Door, you can join Mirabel’s sweet, warmhearted cousin Antonio in a 99-piece buildable set featuring an opening “door” with a working lock and key that opens to a micro-world that includes a hammock, a jaguar cave, and detailed micro-doll figures and cute creatures.

Magic also awaits behind Isabela’s Magical Door. Meet up with Luisa and Mirabel as they explore the wonders of sister Isabela’s room. Enjoy some tea in the garden, surrounded by birds and butterflies fluttering around you, and then have some fun with Isabela’s makeup before you’re called for dinner! With The Madrigal House, you can bring movie-based play or creative fun home with Mirabel and her family in their magical house in Colombia. Explore the rooms and get to know Mirabel!

After you see the movie, you’re sure to fall in love with Mirabel’s wonderfully musical & unique personality, which is perfectly captured in Jakks’ Mirabel Singing Large Doll and Magical Butterfly. When the music of “Encanto” gets stuck in your head, sing with Mirabel and see the magic butterfly glow. She also says over 15 film-inspired phrases!

Set in Colombia, “Encanto” embraces the diversity, culture, people and music of the country. Familia, a group of Latinx Disney Animation employees, even shared their personal perspectives and experiences to help shape the film. Similarly, global teams across The Walt Disney Company collaborated with colleagues in the U.S. to bring in four incredible artists from various regions in Colombia to create original artwork inspired by “Encanto.” The collection showcases artwork by artists Catalina Estrada, Sebas Pakui, Diana Ordonez (Ledania), and Jhonny Nuñez, who each utilized their unique artistic styles to capture the heart of the film and its magical story of Colombian culture, music, and family. Check out some of the styles above, and explore the Target exclusive collection further here.

As you’re getting all your holiday shopping done and looking for an amazing gift, Antonio’s Amazing Gift is just that! Inspired by characters and scenes from the film, this brightly illustrated picture book celebrates a love of animals, new friends, and the magical gifts of the “Encanto.” For some fun in both English and Spanish, El Don De Una Familia/The Gift of Family is a bilingual storybook based on the animated feature film that kids ages 3 to 7 will love. It even includes 30 stickers!

Ready to put your best face forward? Check out the Disney Encanto Colección by Alamar Cosmetics – a limited edition 13-piece makeup colección inspired by the magic of “Encanto.” The Alamar team was so moved and inspired by the way “Encanto” uplifts and celebrates large extended families, diversity of skin tones, food, music, and Latino culture. As an independent and Latina owned brand, the Alamar team was honored to be trusted with capturing the film’s magic through the art of makeup.

Go see what magic awaits you in Walt Disney Animation Studios’ “Encanto,” playing in theaters now! And don’t forget to check out these celebrations of the film at Disney parks while you’re at it. Enjoy!

Likes (13)
Share Celebrate the Magic of ‘Encanto’ at Disney Parks and With Fun, Colorful New Merchandise