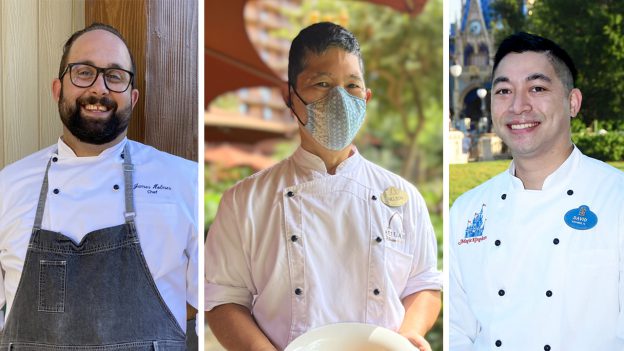 Today is World Vegan Day, and it’s an opportunity to celebrate delicious plant-based options created by our talented chefs at Disney Parks, Experiences & Products. Join us for a culinary tour around our world!

We stopped by Disney California Adventure park to learn about Chef James Holmes’ experience eating plant-based foods and his approach to developing plant-based offerings around the resort!

Chef James enjoys taking a fresh approach to classic dishes that feature meat and recreating them with plant-based options that don’t compromise on flavor. Check out the video below as Chef James highlights two of his favorite plant-based dishes: Tacos Dorados de Papa at Cocina Cucamonga Mexican Grill and the Impossible™ Breakfast Sha-warm-up from Shawarma Palace.

Chef James recently introduced plant-based cooking in his personal life when he was “double-dog-dared” to eat plant-based for a week. He described it as an enjoyable experience, which inspired him to create new foods to share with his friends who eat plant-based.

“Incorporating plant-based offerings at home made me think differently about the offerings we can create here [at Disneyland Resort],” Chef James said. As with any dish offered at the resort, the goal is to make food that tastes and looks great.

While Chef James is no stranger to creativity in the kitchen, his exploration into eating plant-based foods pushed him to take his innovation to the next level. Some of his favorite plant-based dishes to cook at home are Tacos Dorados de Papa, or potato tacos, which he recommends for any meal.

The crispy potatoes in the tacos are topped with a flavorful tomatillo salsa, cabbage slaw and dairy-free crema. He also enjoys watermelon and tomato poke—a Hawai‘i dish traditionally made with raw, marinated fish.

Chef David Nguyen may be known for his creative menu items at Magic Kingdom Park, but it’s his interactions with guests and fellow cast members that he loves most about his role.

David works at the Jungle Navigation Co. LTD Skipper Canteen, where he developed some of the restaurant’s delicious plant-based entrees, including the Perkins Pad Thai, a spin on traditional Pad Thai, and the Crew Stew, a delectable mix of sautéed vegetables in a tomato curry sauce.

“Guests are more interested in plant-based options than ever before,” explained Cheryl Dolven, Health and Wellness Food & Beverage Manager at Walt Disney World. “Many are exploring plant-based food for their personal health, or are eating less meat to help reduce their impact on the environment. No matter the reason, we have hundreds of fun, flavorful and satisfying dishes that showcase the power of plants and delight palates the way only Disney dining can.”

As he learned in his mother’s kitchen growing up, David injects love and passion into every dish he creates. “My greatest reward as a chef is seeing guests enjoy the food my team and I work hard to make. A smile is all I need to know that what I do is worth it,” he said.

Chef David credits his success to all the cast members who supported him throughout his career. Whether they be teammates or mentors, David makes sure he learns something new from everyone he meets in the kitchen. He continues to grow as a chef and an individual, and he keeps making people smile with his food every day.

Want to make culinary magic like David? Visit waltdisneyworldjobs.com to apply for a role today!

What are you waiting for? Give plant-based dishes a try on your next Disney Park or Resorts visit! Be sure to look for the plant-based icon on menus.

If you see our talented chefs around, don’t forget to say hi!