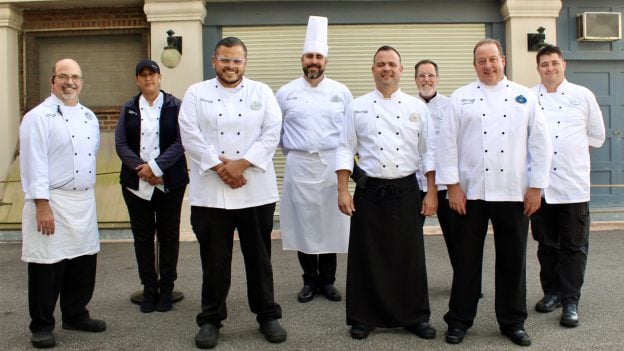 After giving $3 million in grant donations to local nonprofits as part of the 50th anniversary celebration, Walt Disney World Resort is continuing its commitment to the community throughout the season of giving, honoring a distinctly Disney Thanksgiving Day tradition at Coalition for the Homeless of Central Florida through our annual holiday meal service – a tradition more than 20 years in the making!

“Over the past two decades, Walt Disney World Resort chefs have taken turns preparing a traditional Thanksgiving meal with all the trimmings for residents of the Coalition for the Homeless,” Tajiana Ancora-Brown, director of external affairs at Walt Disney World Resort said. “This tradition is an example of how Disney cast members have always aimed to make magic, especially beyond our parks and for those who need it most.”

This year, the Disney’s Hollywood Studios team is once again carrying on the tradition and sharing their culinary talents to bring some extra holiday magic to hundreds of residents.

“It means the world to all of us,” Disney’s Hollywood Studios Executive Chef Bill said. “It’s been a tough year for everyone, and for our team to be able to come together and take care of members of our community who need extra assistance, it means a lot”

It’s also a time-honored tradition for Disney VoluntEARS to team up with culinary cast to help serve this special meal made with love. For nearly 40 years, the Disney VoluntEARS program has played a huge role in the cast experience here at Walt Disney World Resort, providing personal opportunities like this for cast members to give back to the community they call home.

As you’re preparing your very own Thanksgiving meal, our Disney chefs who are cooking up some magic for our community are also sharing a special apple pie recipe for your own tables this year.

On behalf of all our cast members here at Walt Disney World Resort, we wish you a very Happy Thanksgiving!