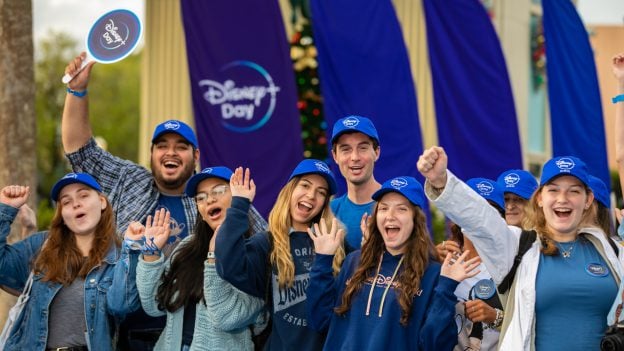 For Disney+ subscribers and fans, the celebration of Friday’s inaugural Disney+ Day at our theme parks may have seemed like a dream come blue!  Guests of all ages enjoyed exciting blue carpet experiences, popular character greetings, themed treats and other Disney+ Day surprises.

Many subscribers and fans of the streaming service even took advantage of early park entry and began celebrating at Walt Disney World Resort and Disneyland Resort before regular park opening.

Popular Disney+ characters joined the festivities with appearances around the parks as well. Guests were able to see favorite characters Tiana, Jane and Turk, Carl and Dug from “Up” and others at Disney’s Hollywood Studios and at the Disneyland Resort during the celebration.

And as one of the surprises for Disney+ Day, guests were able to join the festivities before stepping into the park!

Park entry touchpoints were shining Disney+ blue for the occasion and random guests experienced a special audio surprise from the Star Wars series – “The Mandalorian.”

At Disneyland Paris, cast members rolled out the blue carpet at Walt Disney Studios and also celebrated with special character appearances, celebratory treats and photo opportunities throughout the day.

And as we shared earlier, the celebration also extended beyond the parks.  Guests were able to step up their selfie game on the My Disney Experience app with a special appearance from Grogu. This all-new AR feature rolled out just for Disney+ Day!

Be sure to keep checking back, there’s much more Disney+ excitement to come in the future here on the Disney Parks Blog!