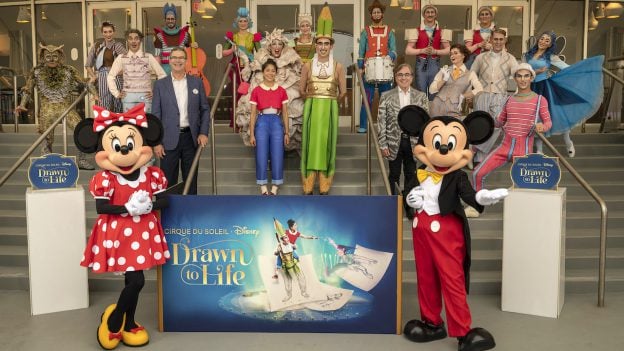 Spectacular. Mesmerizing. Thrilling. Heartwarming. Those are just a few of the words that guests are using to describe the exhilarating grand opening performance of Drawn to Life presented by Cirque du Soleil and Disney.

Following years of creative development, and a pause brought on by the pandemic, Drawn to Life debuted to an enthusiastic crowd last night at the iconic white tent theatre at Disney Springs. John Stamos, two-time Emmy Award-nominated actor and producer, joined Jeff Vahle, president of Walt Disney World Resort, and Daniel Lamarre, president and CEO of Cirque du Soleil Entertainment Group, to welcome the audience and introduce the show.

The true star of the evening was the show itself with its innovative design, acrobatic performances, dazzling choreography and eclectic costuming alongside all-new characters created by Disney Animation artists and an original score inspired by timeless Disney music.

Drawn to Life is the first theatrical collaboration between Cirque du Soleil, Walt Disney Animation Studios and Walt Disney Imagineering. The show tells the story of a determined girl who embarks on an inspiring quest filled with favorite childhood Disney memories, brought to life in Cirque du Soleil’s signature style.

Drawn to Life is a great addition to the entertainment line-up at Disney Springs and another incredible way to commemorate the 50th anniversary of Walt Disney World Resort during The World’s Most Magical Celebration.