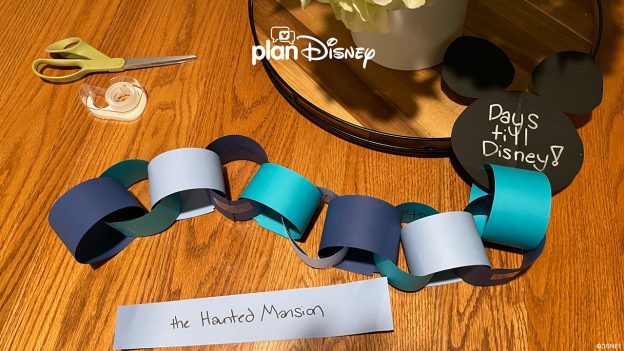 November 12th is no longer just your ordinary day on the calendar. Today is a day to roll out the blue carpet and celebrate Disney+, and here at planDisney we are celebrating with a plustacular idea to incorporate Disney+ in your next Disney Parks vacation countdown!

Chances are that you and your family have created a countdown chain for birthdays, celebrations, and holidays. However, have you created a Disney+ countdown chain for a Disney getaway? Grab those scissors, pull out the construction paper, and create a list of your top Disney Parks-inspired Disney+ movies & shows to create the ultimate countdown chain. Then each day, pull one off, grab a snack, and watch the suggestion on your link to get the whole crew excited for your next Disney vacation. Not sure which movies or shows to include on your chain? That is where the planDisney panelists come in!

For Missy F., she encourages families to include “Behind the Attraction” (a Disney+ original) to their chain. “Behind the Attraction is an informative and FUN behind-the-scenes look at some of the most beloved Disney attractions. My whole family can’t wait to experience these attractions again now that we know more details about them, while my son has taken it a step further and has been inspired to draw blueprints for attractions he’d love to design for Disney someday!”

Speaking of series to add to your countdown chain, Ashley P. says a must link on the chain would be the “One Day at Disney Shorts.” This series on Disney+ features the stories and experiences of Disney cast members, and several shorts highlight cast members who work at Disney Parks. She says, “The shorts have featured an Animal Keeper at Disney’s Animal Kingdom Theme Park, a Candy Maker at the Disneyland Resort, and an Imagineering Project Manager at EPCOT. These short episodes give viewers a behind-the-scenes peek at the unique magic that’s created for guests at Disney Parks.”

Themed nights are how Lauren B. decides which movies to include on her links in the countdown chain: “We love to pick favorite Disney movies from Disney+ and watch them all prior to our trip, but theme the whole night around it, including food! While Sebastian might not approve, we’ll have seafood and watch ‘The Little Mermaid,’ indulge in beignets while watching ‘Princess and the Frog,’ or pair taco night with ‘Coco’! There are so many movies that inspire great snacks that help get us excited to visit the Most Magical Place on Earth.”

As your little ones become not so little, Tabitha D. recommends adding a few classics to your Disney+ countdown chain. “As my children get older, I love introducing them to classic Disney films that have nods in the theme parks. Watching ‘Swiss Family Robinson’ together gave them a whole new perspective when exploring Swiss Family Treehouse in Magic Kingdom Park. After viewing ‘The Computer Wore Tennis Shoes,’ they now understand why there is a pair of tennis shoes outside of the computer room in Journey Into Imagination with Figment in EPCOT. The classics add a whole new layer to Disney inspiration!”

Feeling a little stressed as the links began to disappear and it’s almost time to pack up? Robyn M. has the perfect series for your chain … “Zenmation”! “’Zenmation’ is the perfect Disney+ series when you need a moment of calm. Whether you’re snuggling before bedtime or need some inspiration for planning your Disney days, these shorts highlight the best of Disney animation and music while creating mindfulness moments.”

And if your next countdown should be for a holiday trip to a Disney park, Shantel H. recommends making sure you include “The Santa Clause” movies! Andres has a holiday suggestion too, but perhaps for a completely different reason, “While decorating for Christmas over the weekend, we watched ‘Home Alone’ 1 & 2 on Disney+, so that the kids would know what not to do at the airport during our trip to Walt Disney World Resort next month.”

We don’t know about you, but we can’t wait to create our next Disney+ countdown chain! And from all of us at planDisney … Happy Disney+ Day! For more fun tips like these, and great advice for planning your next Disney vacation stop by @planDisneyPanel on Instagram, @planDisney on twitter, or planDisney.com. We look forward to answering your planning questions.