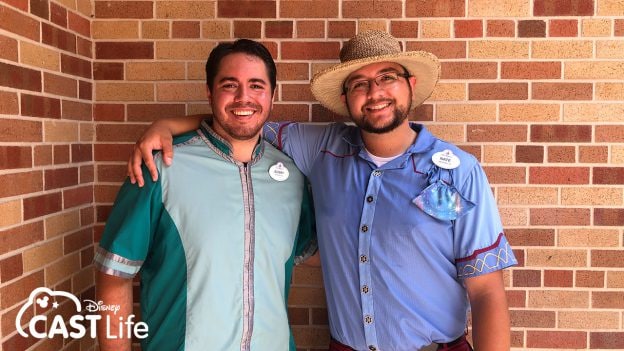 It’s no question that we all enjoy working with our friends, but working at Disney with your childhood best friend and current roommate is an even greater experience, especially for Disney’s Hollywood Studios cast members Bobby and Nate.

Bobby and Nate met during their middle school years in Texas and remained friends throughout high school. They both attended Texas A&M together, graduated in 2020, and decided to follow their dreams to work at Disney. Little did they know, they would both end up working at the same park. “I’ve always wanted to be part of the Disney family,” said Bobby. “But being able to do that with a lifelong friend where we can motivate each other is pretty great.”

Nate, working outdoor food and vending, is stationed throughout the park, giving guests Mickey pretzels and churros. Bobby, an attractions host, welcomes guests into Muppet*Vision 3D as well as “Vacation Fun,” An Original Animated Short with Mickey & Minnie. They don’t necessarily see each other at work every day, but they know they are working together to make an impact on every guest that comes their way, even if it is only for a couple minutes.

When asked why they decided to work at Disney, Nate mentioned how he grew up going to Disneyland with his family and how much he enjoyed the magic and wonder of the parks. Now, living and working in Florida, he’s had the same magic come to life as a cast member: “I love being able to create joy in other people’s lives. That’s what drives me to come to work.” Bobby had the same response, having always wanted to move to Florida to work for Walt Disney World Resort, no matter where it landed him.

They both shared how grateful they are to work together and to be part of the Disney family, making differences in people’s lives. Bobby stated: “Working at Disney is more than just a job for me, I see it as a career. It’s a company that I want to stay with and make a difference.” Advancing in their careers and gaining valuable experience in their roles is a goal for both Bobby and Nate, and something they are willing to work towards with one another. Nate gave great advice to anyone wanting to either start their career or willing to grow in the company: “Don’t be afraid to ask questions and put yourself out there to follow your dreams. After all, we are all one Disney family so everyone is willing to help out where they can.”