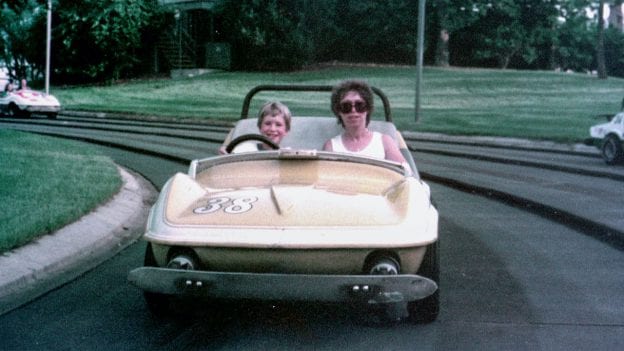 The kick-off to The World’s Most Magical Celebration was filled with many magical memories. I loved reuniting with longtime friends and fellow cast members at Magic Kingdom Park for the start of this 18-month event. One of the special moments was reconnecting with a Disney Legend whom I had not seen in 16 years.

I served as a member of the 2001-2002 Walt Disney World Ambassador team. Occasionally, the Ambassador Program calls upon alumni who have completed their terms to support special events. One such opportunity happened in 2005 when I traveled to Anaheim in California for Disneyland Resort’s 50th Anniversary press event.

During that amazing trip, I met many cast members who built Disneyland park, including retired Walt Disney Imagineer and Disney Legend, Bob Gurr.

Bob developed more than 100 designs for Disney attractions ranging from Matterhorn Bobsleds and Autopia to the Disneyland and Walt Disney World Monorails. He’s often said, “If it moves on wheels at Disneyland, I probably designed it.”

After speaking with Bob at the Tomorrowland Speedway in Magic Kingdom Park for a Disney Cast Life episode, I was flooded with memories of my first visit to Walt Disney World Resort.

I remember feeling a sense of freedom while driving my own car (at 7 mph) with my mother in the passenger seat. What a thrill for a 7-year-old! Years later, I never thought I’d be speaking with the Imagineer who helped bring the original opening-day attraction – then known as the Gran Prix Raceway – to life.

I felt the same sense of wonder pulling into Disney’s Contemporary Resort via a Walt Disney World Monorail that Bob helped design and test. Younger me thought the “highway in the sky” was something transported from the distant future. I still can’t get enough of it today (I know I’m not the only one who recites the safety spiels in English and Spanish at every stop!).

Next time you visit Disney’s Contemporary Resort, look at the beautiful artwork behind the front desk stations in the lobby. Bob helped stylize George McGinnis’ artwork above, which shows a sleek Mark IV Monorail leaving the resort.

Reuniting with Bob during this 50th Anniversary reminded me why I enjoy being a Disney cast member. He and countless others formed an incredible legacy, with their creativity, dedication and passion. It’s something I, along with thousands of my fellow cast members, carry forth today to make Walt Disney World The Most Magical Place on Earth. Thank you, Bob!