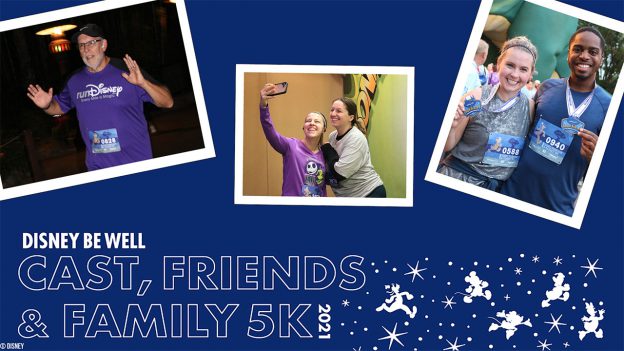 A Magical Morning to Be Well at the Disney Cast 5K

Under the twinkling holiday lights and quiet ambiance of Disney’s Animal Kingdom Theme Park, the Disney Be Well team welcomed back the first in-person Cast 5K since 2019 before the park’s opening. On a typical day, the park usually comes to life with sounds of birds chirping and lions roaring, but this past Sunday, Dec. 5, it was filled with the high-energy and excitement of race participants focused on their wellbeing.

The Disney Be Well… Cast, Friends & Family 5K began by the warm morning glow of the Tree of Life. The excitement was palpable as the event began and participants made their way through the bioluminescent glow of Pandora – The World of Avatar. Well on their way, racegoers could feel the light glow of the sun overhead as they passed Expedition Everest – Legend of the Forbidden Mountain.

Creating even more magic, this event is one of many cast-exclusive offerings to take place during the 50th anniversary of Walt Disney World Resort, and the Disney Be Well team themed this year’s event to The World’s Most Magical Celebration! Mickey and Minnie Mouse joined in on the fun in their EARidescent best, as they cheered on participants! And, as an extra special treat, the event was held on Walt Disney’s birthday, a very special day to many who love to be part of the Disney magic!

The sense of accomplishment each participant felt was evident with smiles and laughter filling the air, and the crowd cheering on all who neared the finish line, especially when they were awarded an exclusive EARidescent finisher’s medallion.

For many, the highlights of the event were the picture-perfect backdrops of the park while others were fueled by the friendly competition. Whether this was their first 5K or their 50th, all were thrilled to once again be participating in an event just for cast members and their friends and family.

Congratulations to all participants!

The Disney Be Well… Cast, Friends & Family 5K is just one of many amazing events organized each year just for Disney cast members! Interested in joining a team of over 65,000 fellow cast members at Walt Disney World Resort? Visit waltdisneyworldjobs.com to apply for a role today, or attend our in-person job fair at Disney’s Coronado Springs Resort on Monday, Dec. 13.