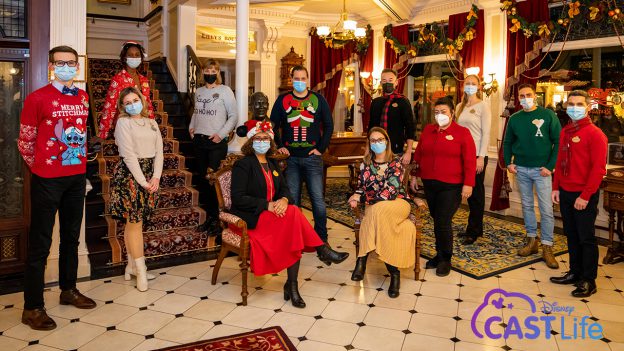 Disney Ambassadors have had the honor of representing Disneyland Paris and its wonderful family of talented cast members ever since Sabine Marcon was named the first Ambassador of the Resort in 1992. Since then, they have continued to play a prominent role, carrying on the tradition and Walt Disney’s desire to share the magic of Disney around the globe.

And as we like to say: once a Disney Ambassador, always a Disney Ambassador! So, it’s only fitting for us to come together and catch up to see how everyone’s doing. Last week was a perfect example of that, when we reunited for the holidays and enjoyed our brand-new Mickey’s Dazzling Christmas Parade, the return of nighttime spectacular Disney Illuminations and even surprised them with a very special gift honoring their legacy.

To recognize those who have served as Disneyland Paris Ambassadors, new Ambassador Alumni name tags in vibrant gold were presented during a small gathering. Those who are familiar with Disney history might even notice the shape and blue coloring inspired by Walt Disney’s Disneyland employee badge #1!