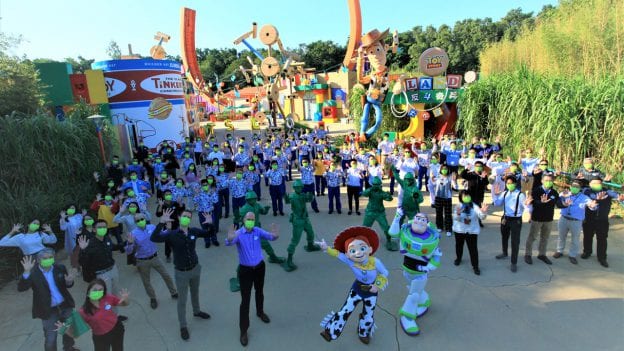 Staff meeting, everybody! Cast members at Hong Kong Disneyland joined some of the stars of Disney and Pixar’s “Toy Story” films last month in commemorating the tenth anniversary of Toy Story Land, the first-ever themed land expansion in the park’s history.

Many of these cast members have grown up bringing the laughter and playfulness to life in Toy Story Land each day. The video below will introduce you to four of these opening day “toy helpers,” each sharing their memories and some of the fun cast traditions that have emerged over the first ten years, along with trivia questions that might be tougher than spotting the Pizza Planet truck.

They weren’t the only ones celebrating—you’ll also see video greetings and congratulatory messages from cast at other Disney Parks lands around the world inspired by “Toy Story.” And below, check out the specially designed pavement artwork at the land’s entrance, made by the Custodial team for the occasion.