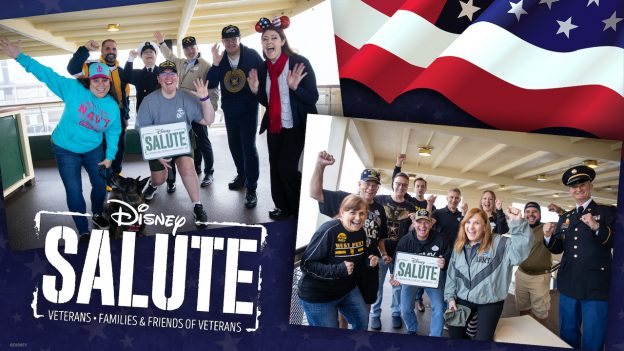 Ahead of one of the most storied rivalries in college football known as “America’s Game,” Disney cast members with a love for either the Army or the Navy met on Seven Seas Lagoon near Magic Kingdom Park at Walt Disney World Resort for a most unique Disney ferryboat showdown!

During the showdown, Army veterans boarded the General Joe Potter ferryboat at the Resort while Navy veterans took command of the Admiral Joe Fowler to shout “Go Army” or “Go Navy” in support of this time-honored rivalry.  The fun face off was captured on video as part of Disney’s first-ever “Army-Navy Spirit Spot” – a military tradition of creating videos in support of either the Army or the Navy for the game.

The Walt Disney Company’s robust history is full of stories of veterans helping bring the magic to life following their military service. Disney’s support for those who serve has been evident throughout the company’s nearly 100-year history starting with our founders Walt and Roy Disney serving their country during World War I. Roy was a Navy Petty Officer from 1917-1919 and Walt was an ambulance chauffeur for the Red Cross Ambulance Corps in France at the end of the war. It continues today with our veteran and military spouse hiring program known as “Heroes Work Here.”

Veterans bring the skills and experience they learned while in uniform to Disney. They also bring elements of the military culture with them including good-spirited interservice rivalries. And, there is no bigger rivalry in the U.S. military than “America’s Game.”

Saturday’s game pits the Black Knights of the U.S.  Military Academy at West Point, and the Midshipmen of the U.S. Naval Academy in Annapolis. The two schools have met on the gridiron 122 times since 1890 and the contest has been televised annually since 1945. In fact, a staple of televised football—the instant replay—debuted during the Army-Navy game in 1963.

Our ferryboats are a special way that Disney honors veterans every day that often goes unnoticed. One of the highest honors the U.S. military can bestow is naming a U.S. Navy ship after our nation’s heroes. In similar fashion in 1997, Walt Disney World honored U.S. Army Major General William “Joe” Potter and Navy Rear Admiral Joseph “Joe” Fowler by re-christening two of our ferryboats that transport guests to and from Magic Kingdom Park across Seven Seas Lagoon.

The Admiral Joe Fowler is named in honor of Navy Rear Admiral Joe Fowler, a Naval Academy graduate who served in both World War I and World War II. After his service, he joined Disney and oversaw construction of Disneyland and then was given the responsibility to plan and build Walt Disney World. Another ferryboat is named in honor of Army Major General Joe Potter, a graduate of West Point who helped plan the D-Day landing at Normandy and served as the governor of the Panama Canal Zone. Upon joining Disney, he oversaw the construction of Walt Disney World’s entire infrastructure including designing the layout for all underground utilities and sewer, power, and water treatment plants that were a marvel of modern engineering for the time period.

Now, five decades later, the contributions of these veterans and Disney Legends are on display as Walt Disney World Resort continues its incredible 50th anniversary celebration.

“We’re proud to honor the contributions of all of our cast members, Imagineers and employees who have served, or continue to serve in the U.S. Armed Forces,” said Josh D’Amaro, chairman, Disney Parks, Products and Experiences. “And to all of our veterans around the world, thank you for all you do.”