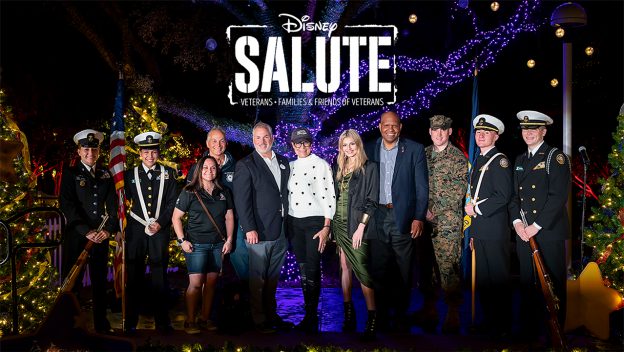 As we reflect on November’s National Veterans and Military Families Month here at Walt Disney World Resort, we are filled with immense gratitude for our cast members and employees who have served and are an essential part of our Disney family.

“The spirit of service to both our nation and our community was on full display as our cast members who served in uniform enjoyed the beautiful holiday displays with their families alongside those who give so much back to communities,” said Cappy Surette, a retired U.S. Navy Captain and co-chair of Disney SALUTE. “We’re grateful to our friends at Give Kids The World Village for hosting this special evening honoring veterans and the families who support them.”

Among the attendees was Disney Institute & Nat Geo Live cast member and retired U.S. Army Lieutenant Colonel Laura Nugent who found the event to be an extra special moment for her family, as her four-year-old daughter, Felicity, was diagnosed with acute lymphoblastic leukemia one year ago this December. Although achieving remission in May, Felicity has spent a total of six months since her diagnosis receiving inpatient care at Orlando Health Arnold Palmer Hospital for Children due to high risk factors associated with her illness.

“Felicity had just finished a 31-day inpatient chemotherapy treatment four days before this Disney SALUTE event at Give Kids The World Village,” Laura said. “It was so nice to be out together as a family and let Felicity and her sister, Gabby, be kids and just enjoy their night.”

Give Kids The World Village is an integral partner in our Wish Granting efforts and a recent Disney grant recipient of $500,000. Wish families are able to laugh, play and create priceless memories together away from hospital visits and medical procedures at Give Kids The World Village, helping children build the physical and emotional strength needed to fight a critical illness – and the Nugent family was able to do just that during this special night at the Village.

“While Felicity has not yet made her wish, I understand why families with little ones who have been through so much make their wish here,” Laura said. “It’s such an amazing and whimsical place – it was like going to Candy Land.”

Over the past year of frequent hospital visits and new challenges, one thing remained constant: the love and support Laura felt from her Disney SALUTE family as they “had her six” each and every day.

“Through this journey, it has meant a lot to me that my Disney Institute & Nat Geo Live team and fellow Disney SALUTE members have been very supportive,” Laura said. “When we talk about ‘cast care at Disney,’ that’s a real thing, and it has meant a lot. My teammates have walked alongside me on this journey and have really cared.”

Thank you to ALL our SALUTE members and military families who have served our country for your bravery, dedication and continued support of each other and those around you.