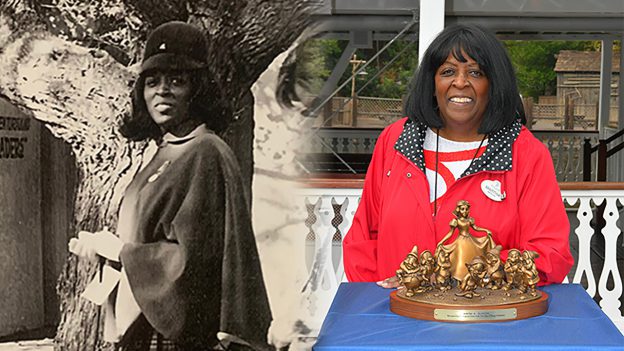 Six of our Disneyland Resort cast members were recently joined by friends, family, their leaders, and none other than Mickey Mouse himself aboard the Mark Twain Riverboat to celebrate an incredible milestone—five decades of service!

Watch the video to share in their special celebration, then keep scrolling to learn about these amazing cast members, their memories and insights from more than 50 years of dedicated service.

“It’s not like going to work. I enjoy everything about what I do – the good and the bad. I just choose to always smile and laugh through it.”

“I’ve always had someone to lift me up here. From birthday parties to baby showers, to bittersweet memories like Roy Disney passing away … everything we’ve celebrated and endured has helped us form a deep camaraderie and friendship.”

Started: July 1971, as a Wardrobe Attendant
Recently retired after serving as Manager, Disney Look and Cosmetology

“Even though there have been so many changes over time and the resort has expanded, the ultimate goal of providing fun family entertainment has stayed the same throughout my 50 years.”

“The friendships I developed with people I worked with kept me coming back. I became part of a group of 12 Disneyland Resort Security Officers … we met weekly for years and still meet up occasionally today.”

“The thing I love most about working at Disneyland is all the friendships I’ve made over the years.”