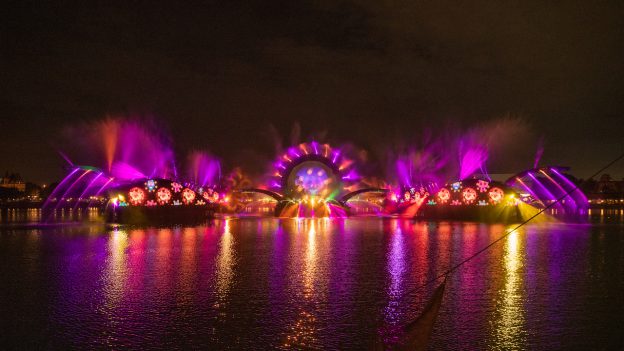 Exploring the Authentic Culturally-Inspired Visuals Seen Throughout ‘Harmonious’ at EPCOT

“Harmonious,” the stunning new nighttime spectacular at EPCOT, has been thrilling guests nightly since the start of the 18-month-long Walt Disney World Resort 50th Anniversary celebration, bringing everyone together around World Showcase Lagoon. This is a show that can only be done at EPCOT. “Harmonious” illuminates our shared humanity and celebrates the power of Disney music to unite us as one global community, with an ensemble of musical artists from around the world reinterpreting familiar Disney songs in their own voice, honoring their respective cultures.

Since the beginning, the park has showcased a unique visual signature – from the architectural iconography of Spaceship Earth to the symbolic graphic and logo design to seasonal and global décor. Our team leading the EPCOT transformation has focused on new expressions that forward this visual identity by engaging artists, cultural experts, and talents from across the globe to bring new design concepts to life. This is particularly evident with “Harmonious.” In addition to the incredible music, the show is also a visual tour de force, drawing artistic inspiration from diverse cultures to present a unique look and style in each sequence throughout the show.

Once the opening act sets us on our way, the global journey of “Harmonious” begins in the Middle East with “Arabian Nights” from Disney’s “Aladdin” and imagery inspired by Arabic calligraphy and geometric designs. Music from “The Jungle Book” is accompanied by traditional Indian shadow puppets, handcrafted for the show by a multi-generational family of Tholu Bommalata artists from India.

The song “Reflection” features Chinese ink painting, with significant contributions by a graphic artist from China. Motion capture techniques were also used to accurately convey the movement of Chinese martial artists in the “Mulan” scenes and the Mexican folk dancers in the “Coco” sequence, for which original art of Mexican sugar skulls was also provided by Pixar Animation Studios artist Ana Ramirez.

Songs from “The Lion King” are visualized in an art style inspired by bold and colorful African textiles. In the European sequence, a look of stained glass – including a nod to the famed Rose Window of Notre Dame Cathedral – is used during “Out There,” transitioning to Scottish woven tapestries for “Touch the Sky” from “Brave.” And the vibrant style seen with “Dig a Little Deeper” in the Gospel-infused North America sequence is inspired by the work of Harlem Renaissance artist Aaron Douglas, who also served as inspiration for Walt Disney Animation Studios in creating the look of the film, “The Princess and the Frog.”

In developing the authentic visuals for “Harmonious” our teams at Disney Live Entertainment and Walt Disney Imagineering worked closely with a broad range of cultural consultants and artists, including individuals from the National Museum of African Art and Kennedy Center International Programs, as well as independent advisors representing each of the cultures and countries depicted in the show. In striving for accuracy and authenticity, teams also connected with the filmmakers and cultural consultants at Pixar and Walt Disney Animation Studios, as well as Imagineering artists and designers from around the world. The entire project was a labor of love for everyone involved.

For more on “Harmonious,” be sure to watch the latest episode of the Disney+ original series, “Disney Insider,” now streaming and featuring a behind-the-scenes look at the development of the show with Disney Live Entertainment Creative Executive Steven Davison and Walt Disney Imagineering Senior Music Producer and Creative Director Yaron Spiwak.

“Harmonious” is a key component of our ongoing transformation of EPCOT, which continues in 2022 with the openings of Connections Café and Eatery in World Celebration and Guardians of the Galaxy: Cosmic Rewind in World Discovery. Be sure to follow Disney Parks Blog and me, @thezachriddley on Instagram, for regular updates on all the exciting developments bringing the magic of possibility to life at EPCOT.