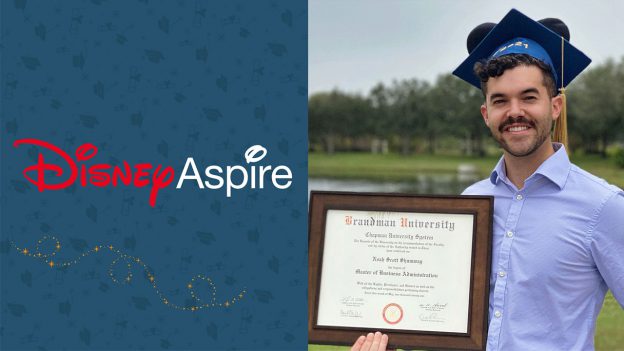 Growing up in southern California, Noah Shumway experienced the wonder of Disney Parks at a young age. From the first time he stepped through the gates of Disneyland, Noah knew he wanted to be part of the magic.

After graduating with his bachelor’s degree, Noah joined Disney full-time in 2018 as an entertainment cast member – realizing another dream in the process: Earning a Master of Business Administration and finding a professional role in finance by participating in the Disney Aspire program.

Available to eligible hourly full-time and part-time employees and cast members, the education program pays 100% of tuition up front and helped Noah believe in himself and his abilities, which inspired him to take and achieve this hard-earned goal.

Disney Aspire empowers cast members to take their futures into their own hands by offering a wide range of programs, from skilled trades to master’s degrees. To Noah, Disney Aspire represented a chance for advancement and opportunities to better position himself to achieve his goals. He was also inspired by his parents, who both have master’s degrees.

Noah had a strong support of friends, family and fellow cast members when he began classes in 2019. He also received student coaching every step of the way from counselors – from application to enrollment, something Noah appreciated. “Disney wants you to succeed while you’re in school, and they give you the tools to do so.”

After graduating, Noah looked to his leaders for advice on what to do next. One common answer: Network. Noah said everyone he met with – from coordinators to executives – was supportive of his ambitions, suggesting a new cast member to meet.

The networking paid off. Now, Noah is an inventory specialist within revenue management and helps keep our resorts running smoothly. Many of his classes helped increase his problem-solving skills, only making him more confident in the role. His courses also gave him a more holistic view of the systems used and a better understanding of the revenue side. At the end of the day, Noah is using his degree to help keep our operations moving forward in new and innovative ways.

“The fact that Disney is willing to invest in its cast in this capacity is phenomenal. I’m proud to work for a company that values its employees and continues to invest in them,” Noah said. “It’s a program I can’t recommend enough.” Want to make magic like Noah? Visit waltdisneyworldjobs.com to apply for a role today! And be sure to visit our in-person job fair Monday, Dec. 13, at Disney’s Coronado Springs Resort. After 90 days of employment, eligible full-time and part-time hourly Cast Members become eligible to apply for Disney Aspire. Learn more at aspire.disney.com.