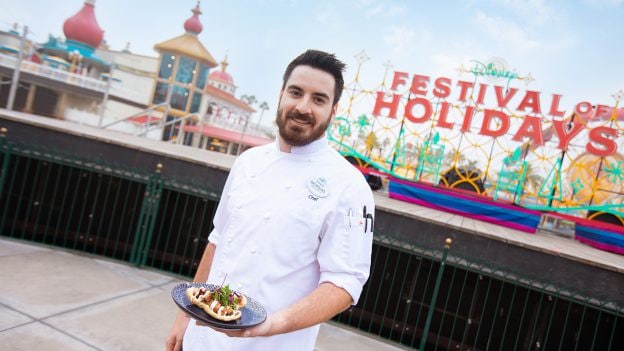 Disney Parks around the world are known for their Mickey Mouse-inspired eats — from Mickey Mouse waffles and pancakes to cookies and pretzels. And now, Mickey-shaped Reimagined Beef Brisket Wellington is on the menu at Disney Festival of Holidays at Disney California Adventure Park!

Chef Nick Carter joined Disney in 2009 as a steward at Plaza Inn at Disneyland Park. When he started, food wasn’t necessarily his passion, but with mentorship from the chefs at the restaurant, his interest started to grow. “I was always a picky eater growing up,” Nick said. “My parents laughed when I told them, ‘I’m going to culinary school!’”

Soon after his time at Plaza Inn, Chef Nick joined the Festivals team at Disney California Adventure Park and was helping to craft dishes for events such as Disney Festival of Holidays. Whenever Beef Wellington came up during menu development, “the task seemed really daunting at scale.”

“Beef Wellington is a very traditional holiday roast, but to do it on a scale this big was kind of a tricky idea, so I wanted to find a way that we could do it,” Nick said. “We partnered up with different teams and came up with the idea for the Mickey-shaped puff pastry.”

“You eat with your eyes first, so when you see it, you think, ‘Wow, that’s really interesting.’ It’s really fun to try and tackle that task,” Nick said.

Take in the sights, sounds and flavors of Disney Festival of Holidays at Disney California Adventure Park now through Sunday, Jan. 9!