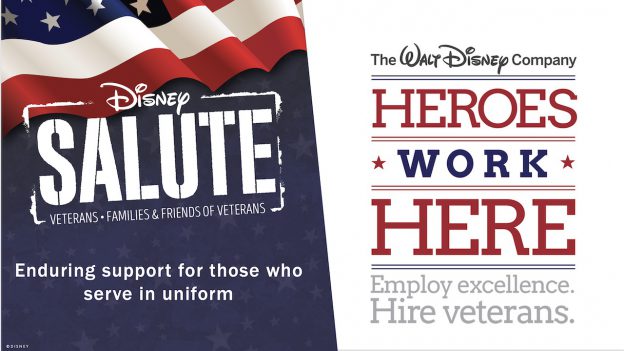 The Walt Disney Company was honored with the 2021 Student Veterans of America (SVA) Corporate Partner of the Year Award on Jan. 7, 2022, during the organization’s 14th annual national conference held at Walt Disney World Resort. The award recognized Disney’s continued work in championing student veterans above and beyond the call of duty.

Student Veterans of America (SVA) is the premier organization leading service, research, programs, and advocacy for veterans in higher education. Founded in 2008, the organization has grown to include a network of more than 1,500 on-campus chapters designed to help veterans pursuing higher education following their military service to live their best lives.

“For many years, SVA has been proud to partner with The Walt Disney Company in our shared mission to support student veterans, military-connected students, and their families in higher education and the transition to the civilian workforce,” SVA’s National President and CEO Jared Lyon said. “We are incredibly grateful for Disney’s generous and enduring support for our community, including hosting us this year for our 14th Annual National Conference at Walt Disney World.”

Support for the U.S. Armed Forces and veterans has been a long-standing Disney tradition. The members of our armed forces serve their country honorably through hard work, loyalty and dedication. Active military, veterans and their families have given so much to us, and Disney wants to continue to give back to them. That tradition continues through Disney’s Heroes Work Here initiative that has hired more than 11,000 veterans since 2012 and through Disney’s Veterans Institute, which has helped hundreds of companies across the country establish veteran-hiring programs of their own.

During the SVA National Conference, student veterans had the opportunity to meet with Disney talent acquisition cast members, representatives of our Disney SALUTE veteran affinity group and learn best practices in several aspects of the job interview process to help our nation’s heroes in their post-military career journey.

“We enjoyed meeting with so many incredible veterans throughout the SVA national conference,” said Matt Andolina, senior recruiter with Disney Talent Acquisition and a member of the Disney SALUTE leadership team. “It was quite an honor to be able to offer help and career guidance to so many of our nation’s heroes who have done so much for us during their military service.”