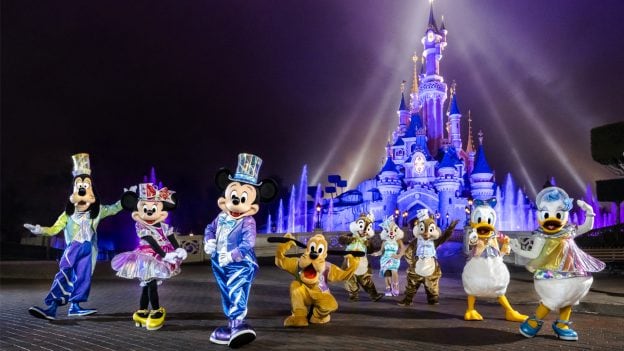 Enchanting hundreds of millions of guests and creating unforgettable memories for 30 years, Disneyland Paris will begin celebrating its anniversary on March 6, 2022. To reach this historic milestone, this new era will be marked by transformation, limitless creativity, and new technology. The continued success at the resort is owed in part to the commitment of innovating new ideas, exploring new paths and continuously reinventing oneself. The next chapter of Disneyland Paris holds true to that as we unveil the details of this magical celebration.

Guests will be welcomed with an all-new daytime show called “Dream…and Shine Brighter!” in front of Sleeping Beauty Castle, which is now more beautiful than ever following its 12-month refurbishment. Underscored by a unique soundtrack, this captivating show celebrates the power of laughter, passion, and dreams.

Featuring more than 30 Disney characters and dancers, Mickey, Minnie, Donald, Daisy, and their friends will be dressed in new “iridescent” costumes created for the 30th anniversary. More than 2,000 lines of rhinestone were sewn, nearly 700 meters of fabrics were printed, and over 190 jewels were used to create these dazzling looks.

And at nightfall, before the start of “Disney Illuminations”, a new spectacular pre-show “Disney D-Light” will light up the sky. Combining video projections, illuminated water jets, lighting effects, mist, famous Disney songs, and drone choreographies, will transform the Castle as never before. Created for the 30th anniversary by a symphony orchestra at the famous Abbey Road Studios in London, the new theme song “Un monde qui s’illumine” will play as 200 synchronized drones take over the sky, forming a sparkling figure “30” right above Sleeping Beauty Castle. This will mark the first time a Disney Park utilizes drone technology as part of a daily outdoor show.

Additional entertainment offerings are making a return starting with “Mickey and the Magician” in spring/summer 2022 and “Disney Junior Dream Factory, Disney Stars on Parade”,which made its big comeback early January 2022 after two years.

Even more magic is coming to Sleeping Beauty Castle, where a new enchanted promenade featuring 30 art pieces will be installed. Celebrating nature and embodying the diversity of Disney and Pixar characters, the “Gardens of Wonder” will come to life in various forms inspired by windmills for children, the world of Salvador Dali, and more.

Main places such as the Gazebo, Main Street Station, and Disney Village will be transformed as well in an “iridescent” theme, featuring sparkling blue and purple hues with lighting effects, neon lights and backlit kinetic mobiles.

Resort chefs and bartenders are preparing nearly 60 tasty dishes, delicious desserts, and exclusive cocktails. As part of this celebration, all-new vegetarian friendly options will be available including a vegan panini, a recipe specially for the 30th Anniversary, and a salted mashed potato waffle. Marvelous new desserts are on their way to table-service restaurants, such as Le Bouquet final, a white chocolate and strawberry cake served under a dome, and the 30th-Anniversary-themed delicious macaron assortment included in all-you-can-eat buffets.

For those looking to shop anniversary merchandise, teams have designed more than 350 NEW exclusive items — the most significant product development program ever conducted at Disneyland Paris!

From limited-edition collectibles to key chains, anniversary-themed plush, iconic ear headbands, and trendy sweatshirts, the 30th Anniversary of Disneyland Paris, these offerings will debut over the course of the celebration.

And we’re thrilled to announce the First Ultrachic Pantsuit for Minnie Mouse at Disneyland Paris, designed by Stella McCartney herself. Starting on March 6, 2022, find Minnie Mouse at Walt Disney Studios Park as she rocks a new take on her signature polka dots for a limited time.

Starting Summer 2022, the highly anticipated opening of the new theme-based area “Avengers Campus” will invite guests to embark on a brand-new, epic journey as part of the transformation of Walt Disney Studios Park. The 30th Anniversary marks the continued expansion into this immersive experience, beginning with the opening of Disney’s Hotel New York – The Art of Marvel in 2021.

Be sure to stay tuned as more of this magical anniversary celebration is unveiled at Disneyland Paris!