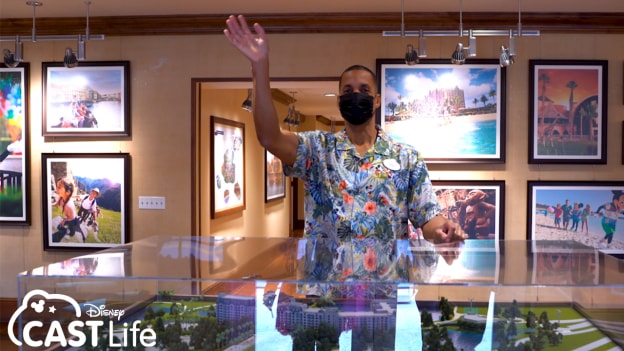 A Cast Member’s Family Legacy of Diversity, Equity and Inclusion

Meet Jamil, a Sales Guide with Disney Vacation Club, as he shares his story and how his family helped shape the future of diversity, equity and inclusion within Disney.

One of Jamil’s earliest memories as a child was coming to Walt Disney World Resort with his family. “At a young age, my uncle instilled the magic of Disney in me and made me want to be a cast member where I could share the magic with families on my own. That’s what I’m doing today as a Sales Guide with Disney Vacation Club.”

Jamil’s uncle, Bob Billingslea, was a cast member for 43 years and served as the liaison for organizations including the NAACP, the Urban League, 100 Black Men and United Negro College Fund. When Disney voiced its commitment to diversity in its hiring practices by signing a letter of understanding with the NAACP, he called it a highlight of his career.

When reflecting on the impact his uncle had on him, Jamil shared, “I was fortunate to have role models in my life who showed me that no matter what the world might have told me, I was always able to see what I was able to achieve through people like my grandfather and my uncle. They were my early role models and they instilled in me that anything was possible.”

When it comes to the role Disney played in Jamil’s life, he shared, “I definitely grew up a Disney kid. Anyone you talk to will tell you a personal story of how this company has touched them. That shows you how impactful Disney is and what a role it plays in all of our lives. By representing diversity in all of our offerings and experiences, it allows people to further anchor on to our stories and fully experience the joy that is found only at Disney.”

When asked about the impact Disney has on diversity, equity and inclusion, Jamil added, “By sharing new diverse stories in our experiences, it allows kids of all ages to feel and believe they can do anything they want; they just need a dream and they can achieve anything they want to believe.”

“It’s such an honor that I’m able to share the magic of Disney in my role as a Disney Vacation Club Sales Guide. As I introduce families to Disney Vacation Club, I hope that through our Membership they’re able to make their own memories by coming to Walt Disney World, just as I did.”