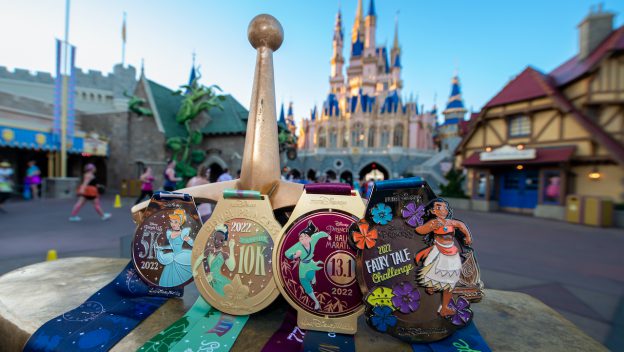 A Weekend of Fairytale Finishes During the runDisney 2022 Disney Princess Half Marathon Weekend!

It was the Ultimate Princess Celebration during a weekend of fairytale finishes as runners traded their glass slippers for running shoes as part of the runDisney 2022 Disney Princess Half Marathon Weekend presented by CORKCICLE. Filled with magical miles and participants running their happily ever after through The World’s Most Magical Celebration, runners celebrated the courage and kindness of the Disney Princesses in a weekend of exciting events. The enchanting race weekend featured four events including the inaugural Disney Princess Sunrise Yoga, three endurance runs and a multi-race challenge to put runners to the test.

Kicking off the weekend’s festivities, runDisney hosted the first-ever Disney Princess Sunrise Yoga at Magic Kingdom Park. Courage, kindness and finding inner peace were all a part of the early morning event as participants found calmness before a weekend filled with endurance events.

During an endurance weekend celebrating the incredible attributes of the Disney Princesses such as courage and strength, it’s only fitting that 50 trailblazing women ran the Disney Princess Half Marathon as part of ESPN’s Fifty50 initiative. The Fifty50 initiative celebrates the upcoming 50th anniversary of Title IX, the landmark legislation enacted in June 1972 that ensures equal opportunity for women in athletics and education. Look for more inspiring stories to come this June as part of the initiative.

Speaking of celebrations, it was an impressive final finish at the Disney Princess Half Marathon for Pennsylvania runner Georganne Watson. Watson, a former University of Kentucky track star, won her first runDisney Half Marathon by inching ahead in the final 100 yards to secure the win by 7 seconds! “We were neck and neck until 75 meters to go. It was like two Disney Princesses duking it out the whole race,’’ Watson said about her race winning battle. “I had to give 110 percent to get the win.’’

The Disney Princess Half Marathon Weekend closes out the third race weekend in the 2021-2022 runDisney race season. A big congratulations to all the weekend’s racing royalty! You can still join in the runDisney fun with limited space remaining in the runDisney Springtime Surprise Weekend (March 31 – April 3). Start making plans for next race season with event and registration dates available here.

Did you join us for the Ultimate Princess Weekend? Be sure to share out your event photos in social using #PrincessHalf. To learn more about runDisney events, visit us here.

Likes (4)
Share A Weekend of Fairytale Finishes During the runDisney 2022 Disney Princess Half Marathon Weekend!