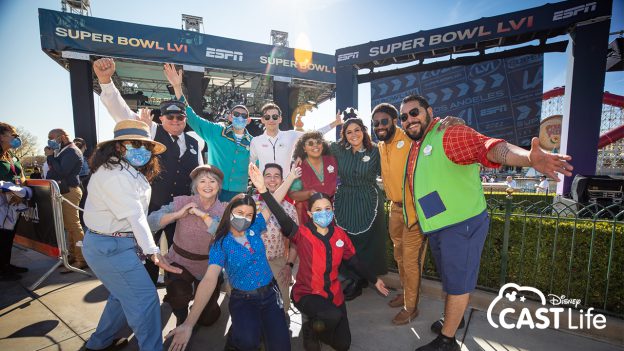 Check out the ways we celebrated Super Bowl weekend with a few of our “Most Valuable Cast Members” at the Disneyland Resort!

To kick-off the Super Bowl weekend on Friday, Feb. 11, Nataly, a Disneyland Resort Ambassador, reported backstage as our in-house sideline correspondent to hear fellow cast share who they were rooting for in the big game!

On Super Bowl Sunday, Feb. 13, cast members from across the Resort shared the stage for a special shoutout during “Postseason NFL Countdown” on ESPN. As Nataly hyped up her fellow cast to get them game day ready, we heard from our “M-V-C’s” what this moment means as a Disneyland Resort cast member.

“Who else gets to do this,” said Steve in Attractions as he waited in anticipation before heading onstage to take part in the experience. “I called my aunt and told her I was going to be on TV, and hopefully she is watching me [and cheering me on].”

“I’m just happy to be here,” said Karla in Merchandise. “The recognition means a lot to me, and not only represents the journey I’ve taken with Disney, but personally as well. It’s a really cool experience!”

“It’s always fun to see all of the different companies [in The Walt Disney Company] come together,” said Joe in Attractions. “Having ESPN [at Disney California Adventure Park] is something that we don’t have on a daily basis, and to have fun and get involved is incredible.”

“It’s an honor to be part of this big event, the atmosphere is amazing!” said April in Attractions.

“These events bring people together, [and I enjoy] the camaraderie,” said Joey in Entertainment. “This event is one of those things that not many people can say they’ve had a chance to experience, so it’s something I admire and appreciate!”

Check out the Disney Parks TikTok for special highlights!

The thrills didn’t end on game day. On Monday, Feb. 14, three MVPs from the Los Angeles Rams took the iconic trip to The Happiest Place on Earth and rode cavalcade-style down Main Street, U.S.A. Cooper Kupp, the Super Bowl MVP, even shared a special message to our magical cast.

Who do we hear cheering from the sidelines? Our “M-V-C’s” of course! 25 lucky cast members and their guests were treated to a VIP viewing experience as they shared in the sweet victory, alongside Disneyland Resort Ambassador Nataly.