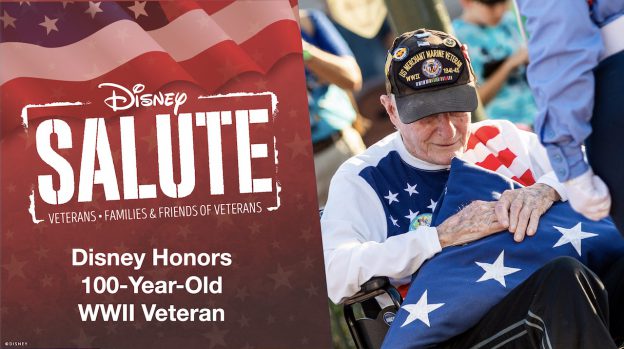 This past Friday, Feb. 18, we extended a very special thank you with a flag retreat to a World War II Veteran celebrating his 100th birthday at Magic Kingdom Park.

William McCroskey served our nation as a Merchant Marine, playing an integral role during the historic D-Day operation in Normandy in 1944 transporting replacement troops onto the beach. He went on to transport personnel and supplies all over the world during the war and visited just about every seaport there is, including ports in Africa and Asia. He served proudly until the end of the war, returning to his wife to start a family.

Accompanied by his son, Ron and the rest of his family, William received the flag hoisted down by the Magic Kingdom’s security team and was honored with a parade down Main Street U.S.A. as guests applauded loudly in recognition of his service.

“We are so grateful to Disney for honoring my father in this way,” said Ron McCroskey, William’s son. “We have created so many memories here at the park with our family, adding this one is a particularly special one that we will all cherish forever.”

Our very own Disney cast member and WWII U.S. Navy Veteran Alex Stromski was also in attendance wearing his Navy Dress Whites uniform to celebrate and honor William. During the ceremony, Alex, along with members of the Disney SALUTE Veteran affinity group, presented William with a shadowbox containing a flag that was flown over Magic Kingdom Park in his honor.

“I really enjoy having the chance to honor a fellow WWII veteran and make William’s birthday a really special one alongside his family,” said Alex, who was honored with his very own flag retreat ceremony last year.

Ron, a U.S. Army Veteran, shared it was special being able to celebrate his father’s milestone birthday in the park where his father brought him and his family when they were growing up.

“It was so incredible what Disney did to make this day special for my father,” said Ron. “Seeing all guests cheer, clap and stand up for my father as he went down Main Street during the Flag Retreat was incredible. It really was magical that people would do that for someone they don’t know just to honor him.”

Coming up on Disney’s 100 years, The Walt Disney Company continues its long-standing tradition and legacy of supporting and celebrating our military and those who have served our nation with our daily flag retreat. Walt and his brother Roy held a very special place in their hearts for our military and their families and we continue celebrating their contributions today.

Magic Kingdom Park selects an active-duty military member or Veteran for the flag retreat honor from among that park’s daily visitors.

Please join us in wishing William a very happy and special 100 birthday and a sincere thank you for all his bravery and commitment to our nation.