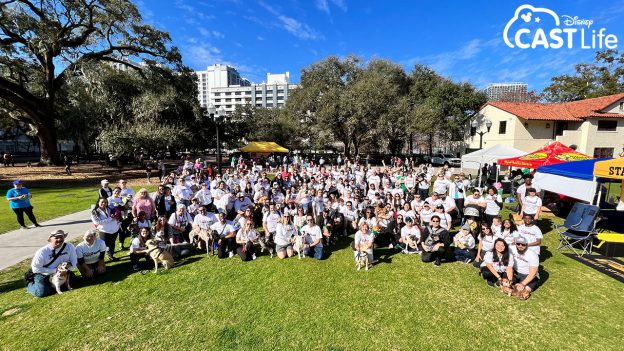 Hot diggity dog! Hundreds of Disney VoluntEARS gathered this weekend at Lake Eola Park in Downtown Orlando for “Paws in the Park,” raising more than $12,000 for the Pet Alliance of Greater Orlando and claiming the title of “top fundraising team.”

“We love being able to continue our long-standing tradition of giving back to the community through our Disney VoluntEARS Program,” Tajiana Ancora-Brown, director of External Affairs at Walt Disney World Resort, said. “And what better way for our cast to do that than alongside their furry friends at events like Paws in the Park?”

Funds raised at this year’s event will go toward helping the organization rebuild a new animal shelter, find permanent homes for animals in need and support the organization’s existing family programs, including low-cost veterinary care, pet behavioral consultation, and animal intake at its remaining shelters. Walt Disney World has supported “Paws in the Park” for more than two decades with Disney VoluntEARS inviting their friends, families, and loyal companions to join in the “dog-gone” fun and support local pets in need.

“I love volunteering at Paws in the Park,” Disney VoluntEAR and ‘Disney Dogs Pack’ fundraising team leader Stephanie said. “As cast members, we all live and work here in Central Florida, and we want to make the community the best that we can for our two- and four-legged friends. I’m filled with so much pride seeing how many of our cast members came out to help.”

“Paws in the Park” is another example of Disney’s commitment to the local community during the 50th Anniversary celebration, which was kicked off with $3 million in grants to six nonprofit organizations across Central Florida.

Here at Walt Disney World Resort, we aim to empower all individuals to create a brighter tomorrow, and we’re excited to see our cast members do just that through the Disney VoluntEARS program and its many events throughout the year. Thank you for giving back!