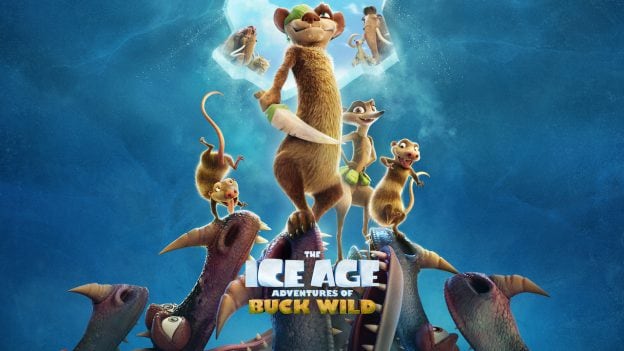 “Ice Age” was a big part of my childhood- Mammoth big! I remember laughing at Sid eating pine cones and dandelions, and learning how the Dodo became extinct over a melon (“There goes our last female…”).

The Ice Age franchise has been one thrilling quest and comedic twist after another, and through the years, the Ice Age films continue their legacy of laughter and adventure. Now, Disney+ is the official home of all-things Ice Age, and on Jan. 28, Disney+ got a little more “Wild.”

“The Ice Age Adventures of Buck Wild” joined the Disney+ family, with its shining stars of Buck Wild himself, and his possum pals Crash and Eddie. In this pre-historic adventure, Crash and Eddie find themselves stranded in a massive underground cave. They are rescued by the one-eyed, adventure-loving weasel, Buck Wild and together they must face the unruly dinosaurs who inhabit the Lost World.

Just like on Disney+, wild adventures come to life in a big way at Disney’s Animal Kingdom Theme Park. Guests can now take a photo with a larger-than-life sand sculpture at Disney’s Animal Kingdom main entrance. It took fifty tons of sand (two semi-truck loads) and four sand carvers several days to bring this sculpture to life, all in celebration of Ice Age on Disney+. Here’s a look at the making of the sand sculpture!

The magic is calling you to Disney’s Animal Kingdom during The World’s Most Magical Celebration at Walt Disney World Resort. During the 50th Anniversary celebration, you’ll find ways to behold the magic of nature with rare animals, wild entertainment, celebratory décor, as well as delicious food and beverage.

Be sure to check out the “Ice Age Collection” on Disney+, which features some favorite Ice Age films, such as “Ice Age”, “Ice Age: The Meltdown”, and “Ice Age: Dawn of the Dinosaurs.”

Still haven’t had enough Ice Age on Disney+? Look no further! Recently announced is the upcoming “Ice Age” adventures starring Scrat. This whimsical series will follow everyone’s favorite acorn-loving saber-toothed squirrel, Scrat, as he experiences the ups and downs of fatherhood, as he and the adorable Baby Scrat alternatively bond with each other and battle for ownership of the highly treasured Acorn. This new series of shorts will be streaming April 13 exclusively on Disney+.

I don’t know about you, but I’ve got my popcorn and drinks ready to watch the collection this weekend! Which Ice Age film is your favorite?