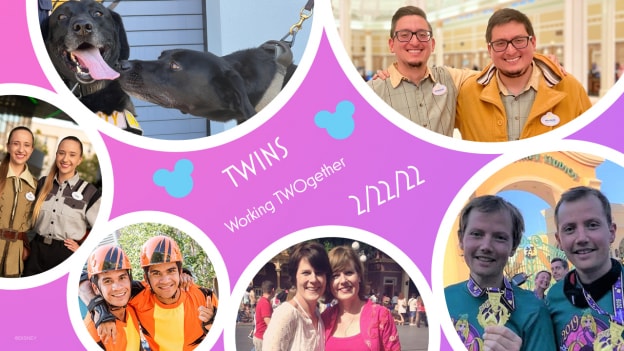 Happy TWOsday! With not one, but two palindrome dates this month on 2/2/22 and 2/22/22, we are celebrating even more cast member twins that work TWOgether—this time at Disney parks around the world! We were so “twin-spired” by our Walt Disney World twins featured on 2/2/22, we knew we had to double the fun for today’s once in two millenniums date: 2/22/22. Now, let’s meet those twins!

Now on their third Disney College Program, Kaisha works at Fantasyland attractions, and Erika works in Tomorrowland attractions. Not only are they part of the same family at home, but they’ve come to love the work families they’ve found here at Disney. “The work families we have found here at Walt Disney World are unparalleled– they accept each of us for who we are individually and for who we are together. Having double the Disney families to enjoy is twice the blessing we could ever ask for.”

Rodolf and Randolf, from the Philippines, are dancers together at Hong Kong Disneyland Resort and started (coincidently) when they were 22 years old (you know we love twos!) The twins were originally born conjoined at their arms and although they are now physically separated, they have remained by each other’s side throughout their Disney careers. “We feel heart to heart. We can always rely on each other whenever we need support, especially when we miss our family back home.”

Wendy and Cindy at Disneyland Resort

Wendy started at the Disneyland Resort in the 1980s and is now a recruiter there. You may recognize Wendy as Disneyland ambassador from 1989. Her identical twin, Cindy, followed in Wendy’s footsteps by starting at the Disneyland Resort in 2012, and currently works in training and entertainment. Cindy shares, “We’ve always finished each other’s sentences— so much so that one of our college professors nicknamed us Chip ‘n’ Dale!”

Their family connections to the resort go even further. Wendy met her husband, Ken, over 30 years ago when he was a park greeter and she was in guest relations. Wendy shares, “To top that off, three out of our four children have been cast members, including one who currently works in Fantasyland attractions and loves it!” Two of Cindy’s children also work at the resort in entertainment. “The Disneyland Resort has truly been a big part of our family.”

The most common question these two get asked is, “Didn’t I just see you?” Emanuel and Mauricio work in identical roles supporting the Concierge team at Disney’s Port Orleans Riverside Resort and are part of the Disney College Program. Emanuel and Mauricio say, “The best part about working together is knowing that we always have the other’s support.”

These twins started their Disney journeys in 2005, serving in restaurants at Disneyland Paris Resort. “Some guests would meet one twin for lunch and see the other twin at dinner. They thought they saw the same person! We hope that we will work together for Disney until the end of our careers,” shares Quentin.

Not only are they doggone cute, Simba and Samford are also twin security canines that came from the same litter. Simba and Samford often have shifts together throughout the parks. Damascus and Brooklyn, their canine handlers, also happen to be close friends. The rest of the security team jokingly refers to all four of them as “The Twins” because of the strong brotherly bonds.