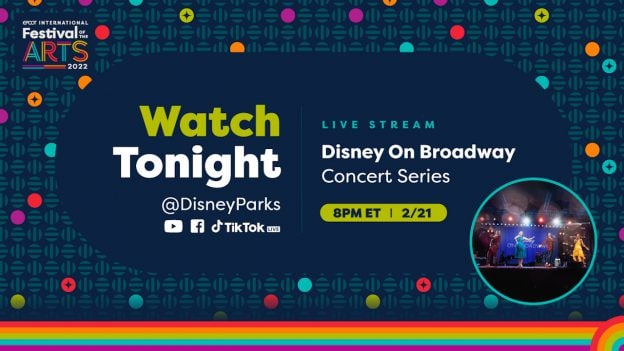 During this year’s EPCOT International Festival of the Arts, magical music has been taking center stage each night with the popular DISNEY ON BROADWAY Concert Series. And tonight at 8 p.m. ET., to wrap the series, we’re hosting a LIVE broadcast of the finale performance from America Gardens Theatre!

Tonight’s special, extended finale of the DISNEY ON BROADWAY Concert Series features Michael James Scott  – who is known for singing “You ain’t never had a friend like me” as Genie from “Aladdin” – and stage superstars Ashley Brown (“Mary Poppins”), Kissy Simmons (“The Lion King”) and Josh Strickland (“Tarzan”).

If you haven’t seen a DISNEY ON BROADWAY Concert Series, different pairs of Broadway stars perform tunes they helped make famous, along with other songs from more than 25 years of award-winning DISNEY ON BROADWAY stage productions.  Tonight’s finale may just be the best show yet!

Our LIVE coverage from America Gardens Theatre at EPCOT begins at 8 p.m. ET., and can be seen right here – on the front page of the Disney Park Blog.  You can also watch the live stream on @DisneyParks TikTok, @DisneyParks on Facebook and on YouTube.