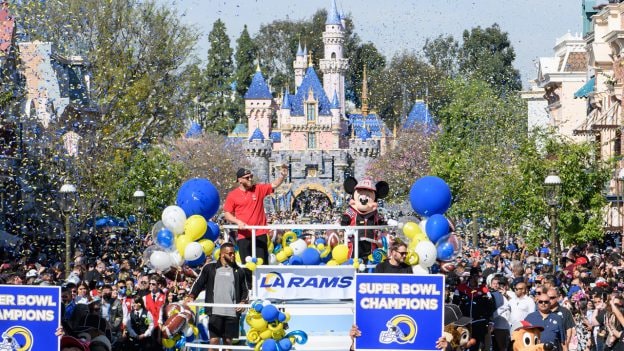 Today, less than 24 hours after their incredible performance led the Los Angeles Rams to victory at Super Bowl LVI, MVP Cooper Kupp, Aaron Donald and Matthew Stafford did exactly what they said in the iconic “I’m Going to Disneyland!” commercial; they celebrated the big win at The Happiest Place on Earth!

After exclaiming those famous words last night, Kupp, Donald and Stafford headed to the Disneyland Resort with their families for some fun today.

Kupp kicked off his action-packed day inside Avengers Campus at Disney California Adventure park. Quite the Super Hero himself, Kupp found himself in good company as he encountered Iron Man, Spider-Man, a member of the Dora Milaje and Black Panther during his visit to the Campus.

Then, Kupp continued his adventure as he hopped aboard WEB SLINGERS: A Spider-Man Adventure and helped his pal Spidey sling webs to capture the out-of-control Spider-Bots. Looks like he’s two for two with saving the day!

Next, Kupp hopped over to Disneyland park and joined his teammates Donald and Stafford. The three players waved to thousands of adoring fans as they made their way past Sleeping Beauty Castle and down Main Street, U.S.A., in a celebratory cavalcade with Mickey Mouse and his pals.

Kupp, Donald and Stafford’s visit to the Disneyland Resort capped a whirlwind 24 hours, which started with them helping the Rams defeat the Cincinnati Bengals 23-20 to win Super Bowl LVI.

Leading the Rams to victory in the big game last night, Kupp scored on a one-yard touchdown pass from Stafford with 1:25 left in the game to cap a dramatic scoring drive, finishing with eight catches for 92 yards and two touchdowns. Donald had four tackles and two sacks, including a sack of Bengals quarterback Joe Burrow on fourth-and-one in the last minute that sealed the victory. Stafford threw for three touchdowns and completed 26 of 40 passes for 283 yards.

Check out this awesome video that highlights all the excitement the teammates had at the Disneyland Resort today!