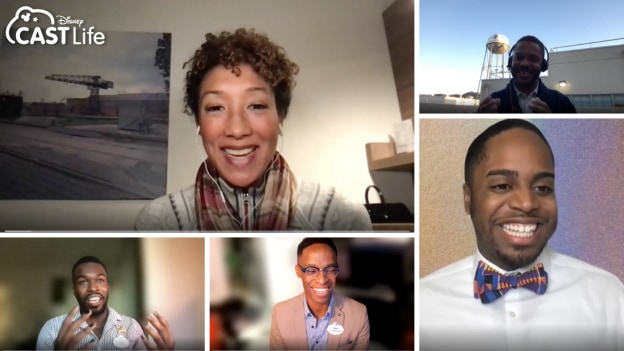 As part of all the ways we are honoring Black History Month, PULSE (People United to Lead, Serve and Excel), one of our Disneyland Resort Business Employee Resource Groups advocating for the development and well-being of Black cast members, celebrated Black joy and stories with a candid and vulnerable conversation about being a Black Ambassador. The panel discussion gave an eye-opening look into what it is like to not only be Black and a cast member, but to experience that in one of the most highly visible roles across the company.

As a leadership team member of PULSE, I was honored and humbled to join an incredible lineup of past and present Disney Ambassadors. From reflecting on the evolution of the Disney Ambassador program to what it feels like to wear the Ambassador pin and represent our community and company in this capacity, this transparent and thoughtful conversation was one of my favorite moments as Ambassador so far.

Take a look at some of the most powerful pieces of the conversation, shared by my fellow Black Ambassadors.

“Until I was selected as a Disney Ambassador, my family never thought something like this role was attainable. Representation is key to what we do at Disney as diversity is our strength. As a Black Ambassador, I want to create authentic connections that inspire and show cast members that anything is possible”

“It’s such an honor, but it’s also pressure. It’s going to be two years of learning and unlearning… ‘Umuntu ngumuntu ngabantu,’ which means ‘I AM because WE ARE.’ This ‘Ubuntu’ mantra has kept me grounded while pressing forward boldly.”

“We’re standing on the shoulders of giants—the many that paved the way for us. When I had a lousy day or a tough time, I just had to think of Ruby Bridges and remember that there are as many different ways for standing up for being Black as there are people in our history. When you are a cast member of color, you don’t have to be Barack Obama or Dr. King – sometimes you just need to show up every day and do your best.”

“When we talk about the power of the [Ambassador] pin, I felt like I had to use that to amplify those that came before me to show the next generation that they too can be part of this amazing company.”

“The pressure is on; everybody’s looking at you. There is so much that just sits right on top of your shoulders, and on top of all that… being Black. But when you have that one cast member who comes up to you and goes ‘thank you,’ it grounds and centers you and lets you know you are where you are supposed to be.”

Huge thank you to our Disneyland Resort PULSE team for providing the space to hold this important conversations and Patrick Finnegan, Senior Vice President Operations at the Disneyland Resort, and incredible ally for facilitating the conversation. Thank you to all of the cast members and employees who tuned in. Keep an eye on @DisneylandAmbassador and other Ambassador Instagram account for more ways to get involved during Black History Month.