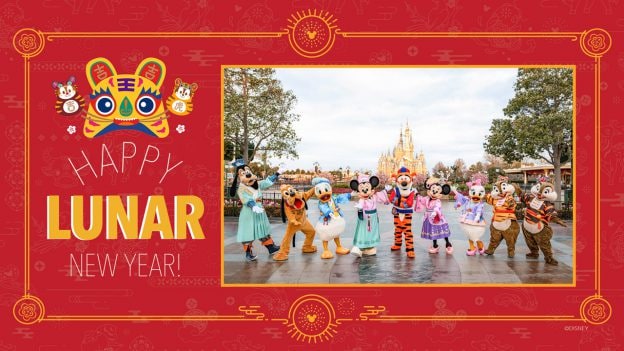 Celebrating the Year of the Tiger, it’s only fitting for Mickey and his pals at Shanghai Disney Resort to sport stylish new looks that reflect the time-honored traditions of Lunar New Year. The entertainment costuming team paid special attention to every detail in each of these unique looks, drawing from traditional Chinese styles. Every stitch of this “haute couture” attire was hand sewn by our tailors and inspired by the stories and motifs of the season.

When designing these 15 different outfits for not only Mickey, but also for Duffy and Friends, the costuming team began by looking at all of the occasions in which these garments would be worn, such as during the “Mickey Avenue Drum Ceremony,” gathering inspiration from time-honored Lunar New Year designs and wishes for the season. From there, the team worked together on rounds of conversations and revisions to land on the perfect design for each character.

This year marked the team’s first time designing traditional Chinese costumes for these characters, featuring details such as cross-collars, wide sleeves, and special touches for each character, like Mickey’s hat and jade pendant. Known for her spectacular sense of style, Minnie is sporting a Chinese fan in her bow and a deer pattern representing good luck for the year ahead – in Chinese, “Deer” is homophonic to “Lu,” meaning good fortune and a successful career.

This quacky couple, Donald Duck and Daisy, are dressed from head to toe in Lunar New Year apparel that dazzles. Donald’s outfit draws inspiration from traditional Chinese opera costumes, with a pin-shaped embroidery on his shoulders, representing wishes for a long and prosperous life. Daisy’s attire includes a Chinese hairpin, floral embroidery, and charming tassel decorations.

Our favorite dynamic duo, Chip and Dale, are tumbling in wearing unique tiger-print acrobatic suits and tiger mask hats. Each look features a lucky orange, which are exchanged as gifts during the season to bring good luck.

And as it’s the Year of the Tiger, Tigger is ready to celebrate as well in a two-piece suit featuring long sleeves and a Chinese-style vest, inspired by clothing of the Qing Dynasty. A keen eye will notice the embroidery appears to be a carp jumping over a dragon gate, referencing a Chinese idiom about achieving success through hard work and perseverance.

The outfits worn by Duffy and Friends feature pink hues, which symbolize the advent of spring, and elements to honor the Year of the Tiger, with costumes representing seven important well-wishes for the season. Together, these friends make up a theatrical troupe, each playing a different role.

And last, but certainly not least, LinaBell is carrying the well-wishes of prosperity and harvest as the “Tiger of Blessing.” Head over to @ShanghaiDisneyResort on Instagram to learn more, as we celebrate Lunar New Year around the world with our guests and cast members.