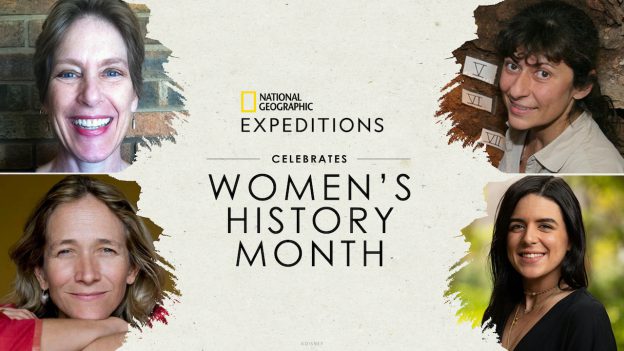 This Women’s History Month, we’re celebrating HER Story, so it’s only fitting that we highlight a few of the incredible women National Geographic Experts — archeologists, anthropologists and historians — who are following in the footsteps of generations who have come before and paving the way for future generations to follow.

Imagine viewing the magnificence of prehistoric cave art alongside someone who has dedicated their life’s work to studying the cradle of civilization. Well, now you can! Spanish archaeologist and National Geographic Explorer Ana Pinto has worked on numerous archaeological sites and conducted research in caves and rock shelters in Spain, Tanzania and Kenya. She received the Prince of Asturias Prize for her team’s discoveries at World Heritage-listed Spanish caves at Atapuerca. Ana will accompany the June 2 departure of the Human History Southern Spain and Northwest France, which includes visits to UNESCO World Heritage-listed caves from Lascaux, France to Atapuerca.

Traveling the Silk Road with an anthropologist is an experience unlike any other. Carroll Dunham is based in Nepal and spends her summers living in Mongolia. She has authored four books and produced more than a dozen films on subjects ranging from the female divine to nomadism and geology. During the Sept. 8 departure of The Silk Road: Discovering the Five ’Stans of Central Asia, Carroll will introduce travelers to the local culture and provide insight on the evolution of this legendary trading route as they visit cities such as Samarkand, Bukhara and Tashkent.

Egypt is full of wonder and mystery – and who better to accompany you on a journey through its architectural marvels and distinctive culture than someone who has spent their career studying the country’s origins. Egyptian-born Nora Shawki is a National Geographic Explorer who has been excavating ancient sites in the Nile Delta for seven years. She served as a field archaeologist at sites throughout Egypt and northern Sudan and now directs her own excavation at satellite sites in the Delta. Nora will accompany multiple departures of Egypt: Ancient Wonders of the Legendary Nile to share her perspective as travelers trace the history of one of the world’s most ancient civilizations.

From the Great Wall and terracotta army of Xi’an to the Forbidden City and Old Shanghai, there is no shortage of history to uncover when venturing to these awe-inspiring sites. Elvira Masson, a professor of East Asian cultural history at New Mexico State University, has been working, traveling and studying in Asia since 1983. She studied Chinese language and modern theater in Beijing and has developed and led academic and cultural programs in China for students of all ages. Elvira will be traveling on the Aug. 30, 2022 and April 2, 2023 departures of the China: Imperial Cities and Natural Wonders expedition where she’ll share stories of these legendary places.

After reading about these women, I hope you feel inspired. I certainly do! Their powerful stories, as well as those they seek to uncover, allow us to step back in time and view the world as it was years ago.

Whether you’re a fan of history, photography, wildlife or simply travel, there’s a Signature Land expedition that is bound to meet your interest. Visit the National Geographic Expeditions site to learn more about these in-depth and enriching itineraries.