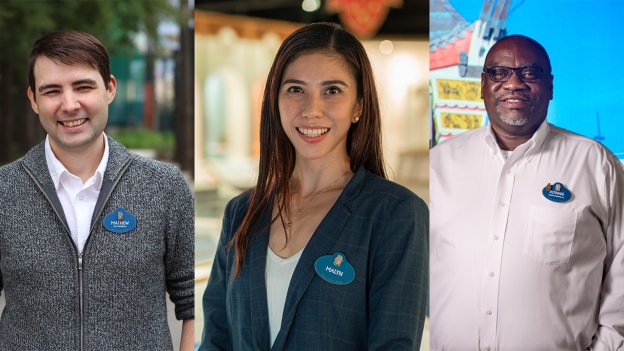 Have you ever been strolling around the resort and encountered a cast member with a blue name tag? If so, you just met a Walt Disney Legacy Award recipient, the highest honor any cast member, Disney Imagineer, crew member or employee can receive. But what’s the meaning behind the blue name tag? We have you covered with 5 things you need to know about The Walt Disney Legacy Award.

Every cast member who is selected to receive The Walt Disney Legacy Award has been nominated by a fellow cast member or peer. Every few years, cast members around the world, from our parks to consumer products, have the opportunity to submit testimonials about fellow co-workers who go above and beyond each day and carry-on Walt Disney’s lasting legacy to our guests and fellow cast.

There are three specific traits each Walt Disney Legacy nominee is measured against: dream, create, inspire. These three qualities were so prevalent across the symphony of Walt Disney’s life and serve as a foundation in deciding if any one cast member’s actions live up to receiving the Legacy Award. A cast member who is nominated must consistently strive to make dreams come true by enhancing the Disney experience, create new innovative ways to deliver Disney magic and inspire others.

The Legacy Award is a global recognition program with recipients from Disneyland Paris to employees in Disney Consumer Products, meaning the Legacy Award name tag is one of the rare name tags you may see just about anywhere.

We have thousands of cast all around the world, but less than 1% of them have the honor of being selected as a Walt Disney Legacy Award recipient. So, if you do see a cast member with a blue name tag, take a moment to learn their story of this rare and prestigious recognition.

Beginning March 7 cast members can begin to nominate their peers. And while this is a cast-to-cast recognition, we can all take part in recognizing cast members every day. From giving a guest compliment at Guest Relations in our parks, to using #CastCompliment on social media, there are plenty of ways to say “thank you” to cast members. And if you don’t know the best way to deliver a compliment on your next Disney journey, just ask and a cast member to point you in the right direction.

Stay tuned to @DisneyParks and our global Disney Ambassadors for more on The Walt Disney Legacy program and to be the first to know when new recipients are recognized in the fall.