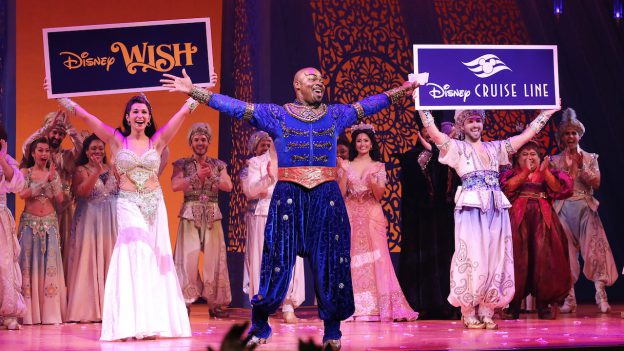 What better way to celebrate the 8th anniversary of the critically acclaimed “Aladdin on Broadway” show than by giving away a sailing aboard Disney Cruise Line? Well, as the Genie might say– let’s make some magic– because for the 888th person attending the March 20th showing, your “Disney Wish” is our command!

You ain’t never had a friend like Michael James Scott, an Orlando-native who originated the role of Genie eight years ago and continues to dazzle audiences by playing the part to this day. He is quite literally in the business of granting wishes, but at the close of this particular show, he got to wield his “phenomenal cosmic powers” and grant another wish to a lucky audience member: a sailing aboard Disney Cruise Line’s newest ship soon to join the fleet, the Disney Wish!

Setting sail this summer, the Disney Wish has it all, including three brand-new and unique family restaurants (not to mention the world’s first “Frozen”-themed dining experience!), the first ever Disney attraction at sea – AquaMouse– plus spaces for the whole family! Kids will interact with their favorite Disney stories and enjoy counselor led programming for every age group. And while the kids are off enjoying the coolest kids’ clubs at sea, adults can relax, dine and play in more ways than ever before in spaces designed just for them. All this and more await guests who come aboard the Disney Wish!

See how the special moment unfolded below!

“Aladdin on Broadway” opened at the New Amsterdam Theatre to critical acclaim on March 20, 2014 and quickly established itself as one of the biggest new blockbusters in recent years, breaking 14 New Amsterdam Theatre house records. Worldwide this stage adaptation of the animated Disney film and centuries-old folktales has welcomed more than 14 million people and continues to dazzle audiences with daring adventure, classic comedy and timeless romance.

You can take a magic carpet ride to New York City to see Genie and the entire cast of the “Aladdin on Broadway” show, and grant your own “Disney Wish” by booking your sailing on Disney Cruise Line’s newest ship!