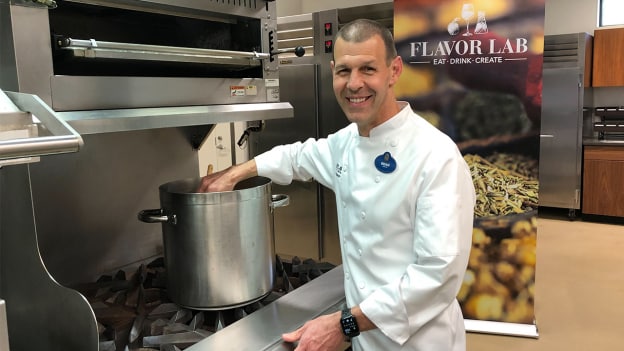 Some say chili is the ultimate comfort food, bringing you that warm, nostalgic, sentimental feeling. From guarded family recipes and secret ingredients to chili cook-offs found across the nation, it’s no wonder chili happened to be one of Walt Disney’s favorite foods.

Fans of Walt Disney may know he had a simple palate when it came to food. He liked fried chicken, bread pudding and was known to enjoy a hearty chili with just a few ingredients. In fact, the Walt Disney Archives  have two of Walt Disney’s chili recipes on record dating back as early as 1958.

“We really loved the idea of using one of these original chili recipes as a nod to Walt in some of our 50th Anniversary menu items,” Brian Piasecki, Culinary Director of Concept Development, said. “But it’s not just about Walt, it’s also about our heritage and culture here at Walt Disney World, where it all started 50 years ago. We chose the recipe we felt would resonate with our guests and developed menu items specific to our parks and resorts to add something special to the celebration.”

The result is several deliciously reimagined menu items found throughout Walt Disney World Resort, including Walt’s Chili on Foot-long Cheese Dog, Cheese Fries with Walt’s Chili, and Walt Disney’s Favorite Chili in a Bread Boule, just to name a few. Our culinary experts take inspiration from classic fan-favorite foods found at Walt Disney World and infuse them with a little taste of where it all began.

Brian, who started with Disney on a culinary apprenticeship program almost 31 years ago, now leads a team of culinary cast members who helped bring Walt’s signature recipe to life.

“My team is a mix of many different cultures and culinary backgrounds and we each have different ideas and skills,” he shared. “This menu we’ve created really brings something special to our guests during the 50th Anniversary and we hope that they feel connected to Walt Disney World and the man that started it all with each and every bite.”

Interested in joining our team of artists, visionaries and storytellers at Disney Culinary? We’re currently hiring a variety of roles including Cook 1, Chef Assistant and more! Visit DisneyCulinary.com to learn more about available opportunities!

Want more cast favorites? Keep an eye out for our Walt Disney World 50th Anniversary celebration Foodie Favorites series featuring our amazing cast members and some of their magical Disney dishes and desserts. And be sure to follow Walt Disney World Cast and Community on Facebook for even more cast member fun.