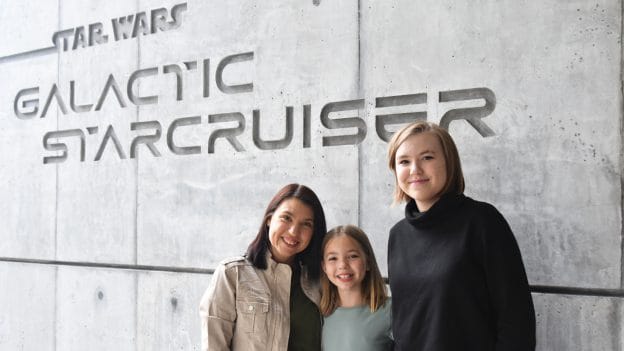 After more than 25 years as a Disney cast member, I’ve been lucky enough to be part of a dozen opening teams – from Disney’s Art of Animation Resort to the Disney Skyliner – and each one has been a memorable experience. More recently, I’ve been part of the team of cast members and Imagineers working toward the launch of Star Wars: Galactic Starcruiser, a project that’s been a great mix of excitement, challenge, energy … and a bit of the unknown. See, this is something big. Something super innovative. Something that truly is the first of its kind. And any time you do something for the first time, it can be a little daunting.

I was optimistic – though a bit uncertain – when my family of three was invited to board the Halcyon starcruiser for a test voyage. But any doubts I had were quickly left in a galaxy far, far away. As casual Star Wars fans, we know just enough to be dangerous at the Sabacc table. But seeing 14-year-old Addison – who tends to prefer the dark side and the First Order – and 10-year-old Zoe – who lives and breathes the optimism and hope of the Resistance – step off the Launch Pod and into the ship’s Atrium beaming ear to ear was the perfect start to the memorable experience this parent was hoping for.

The excitement continued radiating off us as we were welcomed by friendly ship droid SK-62O and Cruise Director Lenka Mok. We quickly realized a ship like the Halcyon was the ride for us. After all, while it might be fun to race across the galaxy in the Millennium Falcon, when it comes to our own travels, we’re looking for something a little more … well, clean.

As soon as our custom itinerary loaded into our datapads, we realized just how much there was to do onboard. Even beyond the bridge and lightsaber training we’ve heard so much about, there was droid racing, a fashion show, ship tours and so much more. And we kept adding things to our itinerary – which we quickly realized was continually updating the more we explored and interacted with the crew. We spent a lot of time together, though there were some moments when Addison was unaccounted for (we suspect there were First Order tasks at play).

On day 2, the fun continued with our excursion on Batuu. We’ve been fortunate enough to visit before, but we’ve never experienced the planet and its Black Spire Outpost quite like this. The datapads guided our adventure and we had fun completing jobs, decoding messages and talking with the locals. We saw things on-planet we hadn’t paid much attention to before – remember when I said we were casual fans? – and between the secret missions, attractions and explorations, we definitely got our steps in that day. When we got back to the starcruiser, I needed a nap! But the kids kept going – playing Sabacc, enjoying the activities, savoring some galactic treats and learning about the Halcyon’s storied history.

Some of the best parts of our voyage were the smaller moments we shared with the characters and crew. Before we stepped onboard, I knew Zoe would be thrilled to see a certain Wookiee during our travels. But I wondered if we would connect with characters who are newer to us. I was pleasantly surprised! Throughout the trip, there were so many fun experiences that struck us – singing songs with Sandro, meditating with a Saja, visiting with Gaya and even teasing some stormtroopers along the way. Definitely highlights!

Then there’s the crew. I know firsthand how much the team trains to deliver on the Disney promise of legendary service. Based on our test voyage, the crew of the Chandrila Star Line are some of the best. We were consistently greeted by name, welcomed with smiles and cheered on through our journey. And while the hospitality they showed was truly out of this world, what struck me more is how special they made us feel.

Shout out to crew member Zoe, who made it a point to check in with our own Zoe after bonding over their shared name. Their tearful farewell at the end of our voyage made my heart happy. Thanks to Chase and Stephen from Passenger Services, who helped smooth some bumps in our path (it was a test, after all). To the stormtrooper who helped me win our family Sabacc tournament – I salute you! And Saja Atin’la, we may need more of your training before we’re able to use the Force, but your guidance and calm confidence made a huge impression. All of you helped me feel like the super mom I always aspire to be.

It’s been a little while since we disembarked from the Halcyon starcruiser and we’re still talking about it around the dinner table. The memories from our family adventure onboard will stick with us for lightyears to come. And I wasn’t the only cast member who got to share the fun. Check out some others who had the chance to become intergalactic heroes.