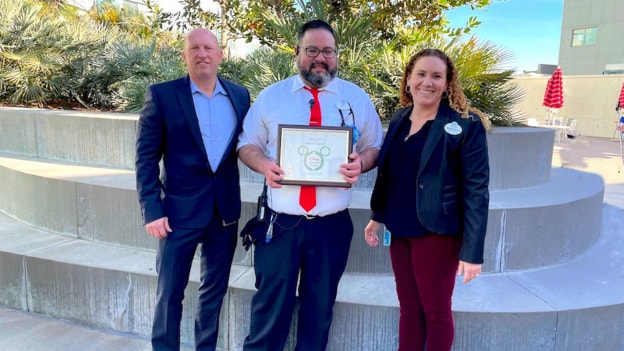 Ray Banales usually takes the same route home after his late-night custodial shifts at the Disneyland Resort. But on Sept. 16, 2021, his drive on the 5 Freeway took an unexpected turn. Ray spotted a car swerve out of control before coming to a stop in the middle of the freeway. His heart racing, Ray pulled over, turned on his hazard lights, exited his vehicle and made his way through traffic toward the vehicle.

“I was terrified, but I tried my best to get the driver to get out of the car while other cars almost hit us,” Ray said. “After he was finally able to get out, the car went up in flames.” Ray then called 911 and waited with the driver until authorities arrived, ultimately agreeing to go on camera for a media interview. “The following day, someone shared it with me, and then it kind of snowballed from there. Reception was very positive, and I had people sharing it with me all over social media.”

One of Ray’s leaders, Disneyland park east general manager Marybeth Miller, heard about the rescue from a fellow cast member and nominated Ray for a Disney Heroes Award, which commends heroic acts performed by Disney cast members, crew members, Imagineers and employees. Any Disney employee can nominate a colleague who performs life-saving actions or reports life-threatening security issues at work or in their community.

“We have some of the most amazing human beings who have chosen to be cast members and they bring our focus on Safety to all aspects of their lives, allowing them to impact not just the guest and cast experience, but also the community experience in a positive way,” Marybeth said. “Ray’s actions came from a place of genuine care and concern for humanity.”

Ray was surprised with the award in a ceremony with family and fellow cast members on Feb. 4.

“It was the right thing to do in my mind,” shared Ray. “If this had been me and I was the one that was in an accident, I would want to think that someone — maybe not everyone — but at least one person would stop and see if I was OK.”