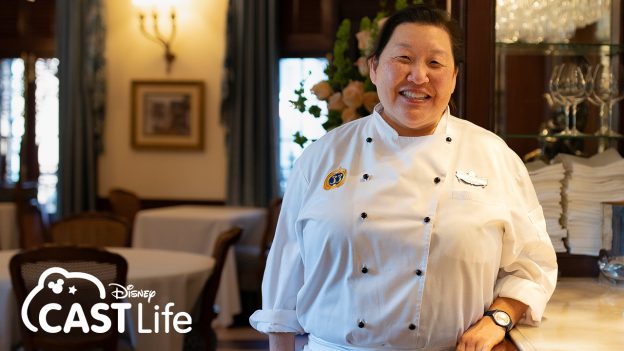 Across Disney Parks, we’re thrilled to share uplifting stories of women all around the world. Today, we’re excited to feature Chef Gloria Tae, who is proud to have recently been named the first female chef de cuisine of the famed Club 33, the most exclusive restaurant at Disneyland Resort.

“It’s definitely not the first place I’ve worked where I was the first female head chef — and I’m proud of that,” she said of the traditionally male-dominated world of fine dining. “But I’d rather be known as a talented chef as opposed to a talented female chef.”

And certainly, the food that comes out of Chef Gloria’s kitchen speaks for itself.

“Having Gloria on the Signature Restaurant Chef Team has been a real honor,” said Chef Andrew Sutton, culinary director for the Disneyland Resort. “Her contributions and thorough understanding of the complexities of fine dining for all of our restaurants is inspiring. In the kitchen, her understanding of the classics within a multitude of cuisines is exemplary and makes her quite a force.”

Gloria is well known to Disneyland Resort foodies, having served in almost every fine-dining location since arriving in 2001 with the opening of Disney California Adventure park. Starting as a line cook in the former Golden Vine Winery, she caught the attention of Chef Andrew, who in 2008 brought her to Napa Rose, the award-winning restaurant at Disney’s Grand Californian Resort & Spa.

“When I first came to Disney, I thought of it as a theme park; I had no idea there was a culinary mecca. And when I went to Napa [Rose], it was like stepping into a different world,” Gloria said of the high standards, refined techniques and attention to detail in the crafting of seasonal wine country cuisine overseen by Chef Andrew, who continues to be her mentor. Gloria then moved to Carthay Circle Restaurant before returning to Napa Rose, where she became chef de cuisine before she and Club 33’s then-Chef de Cuisine Clint Chin switched places in mid-February.

Now, she’s excited to apply her signature creativity to her new role at the world-class Club 33. She acknowledges the significance of the move to a restaurant so exclusive and shrouded in mystery that many guests aren’t even aware of its existence in New Orleans Square (marked by only a “33″ sign next to a door at the top of a curving staircase in the Court of Angels). Walt Disney drew inspiration for the club from the VIP lounges at the 1964 New York World’s Fair; sadly, he died months before its opening in 1967. Gloria will also oversee the exclusive private dining experience at the adjacent 21 Royal, as well as Club 33’s lounge, Le Salon Nouveau. “I miss my family at Napa [Rose], but it’s really exciting to come to the Club with its history and all the mystique surrounding it.”

Born in Seoul, South Korea, Gloria came to Southern California as an infant and grew up in La Crescenta. Her father died when she was young, and Gloria learned her way around the kitchen early, preparing Korean noodles and other dishes for her and her sister while their mother was at work. Gloria always enjoyed cooking, but never considered it as a career option until her second year of college, when she realized her original plan to become a doctor was not for her. She dropped out and took a job as a prep cook at a hamburger chain. “I wasn’t even flipping burgers; I was just forming the patties,” she said with a laugh.

“Back then, culinary wasn’t as popular a career as it is now — this was before the Food Network. But I knew that I really liked the energy and atmosphere of the kitchen,” Gloria shared. “Fellow cooks were from all walks of life with so many personalities; it was exhilarating.” Gloria then went to work at fine dining restaurants in Southern California, forgoing formal culinary school for hands-on education from “incredible chefs who generously shared their knowledge and techniques with me.”

Gloria now loves mentoring others, and says she believes her mix of high expectations and compassion make her a good leader. “The cooks in our kitchen would say I expect a lot from them, but they also know I wouldn’t give them something that I wouldn’t do myself.”

While Gloria concedes she is uncomfortable talking about herself, she was reminded not long ago that her rise as a woman in the culinary world is a big deal. “I guess we were trying to hire for more culinary roles, and a photo of me was used in the campaign. When my niece said she saw a big photo of me at a bus stop [shelter], well, I guess that’s weird, but still kind of awesome.”

For more inspiring stories like Gloria’s, follow along on the blog and @DisneyParks on social for more stories highlighting our incredible women across Disney Parks in honor of Women’s History Month.