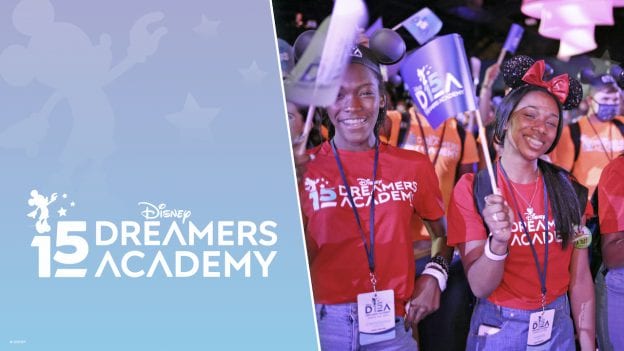 We just wrapped up this year’s Disney Dreamers Academy here at Walt Disney World Resort. And even though this is the 15th year of the program, I always leave wondering the same thing: Who is more transformed by the program – the students or all of us?

I’ve come to realize that the short answer is that it’s impossible for anyone  – the students, the parents, the speakers, the celebrities and the Disney cast members – to attend this event and not be changed by it.

For the past four days, these 100 Black high school students and teens from underrepresented communities from across America have been immersed in various career workshops, mentoring sessions and educational events designed to teach them leadership skills, effective communication techniques and networking strategies. It’s all in an effort to open their eyes to diverse career paths within business, entertainment and sciences, including career opportunities within The Walt Disney Company, which continues to show its commitment to supporting diverse communities.

These students have been rubbing elbows with Hollywood celebrities, such as Grammy Award-winning singer Kelly Rowland and fashion designer Kerby Jean-Raymond, learning life lessons from entertainers they’ve previously only seen on television and at the movies, and generally hob-knobbing with titans of the business industry. How can you not be changed by that?

But the program’s transformative reach is far and extends beyond students to the parents and guardians. That was never more obvious than during yesterday’s commencement ceremony. Every year, there’s rarely a dry eye in the crowd during this final gathering of the weekend when the parents and guardians present the students with their official Disney Dreamers Academy class rings.

And for the rest of us – the speakers, the celebrities and the throngs of Disney cast members who work tirelessly to stage this enormously complex event each year – we are changed by the whole experience, by witnessing these young, impressionable kids enter this magical place and leave more confident, self-assured and empowered, and clutching dreams as big as the guy who started out with a dream about a mouse.

Now that this year’s event is over and the students are heading back home, perhaps some will become doctors, graphic engineers or entrepreneurs like so many other former Disney Dreamers Academy students.

No one knows for sure what they will do. What is certain is that they left Walt Disney World Resort today with the unshakeable belief that there’s nothing that they can’t do.