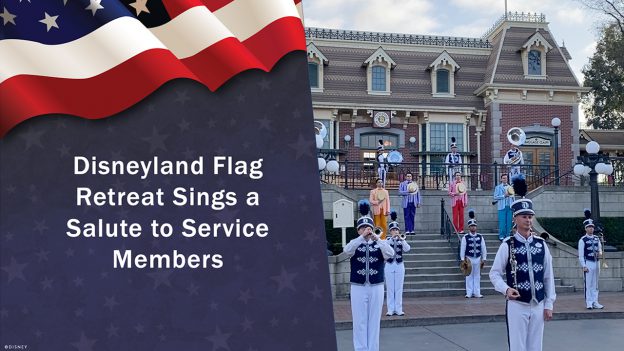 For the first time, the lyrics to each service branch’s anthem were sung out by the Dapper Dans, active-duty service members and veterans during the ceremony. As service men and women surrounded the flagpole, the lyrics to “The Cassions Go Rolling Along,” “Anchors Away,” “The Marines’ Hymn,” “Semper Paratus” and “The U.S. Air Force Song” conveyed stories of courage, service and sacrifice. As in previous ceremonies, stirring recordings of patriotic quotes from Martin Luther King, Jr., former U.S. presidents and even a recording of the 1969 NASA moon landing played in between the songs.

The daily Flag Retreat Ceremony in Town Square began on Disneyland’s opening day in 1955. Security cast members have diligently raised and lowered the American flag each day, including during the park’s 13-month closure. Entertainment cast from the Disneyland Band and Dapper Dans regularly contribute musical performances to bring emotion to the time-honored ceremony.

This week, the Dapper Dans rejoined the ceremony for the first time since the park’s closure in 2020. Dapper Dans performer Jim Campbell feels a deep connection to the lyrics; as he sings, he reflects on his own Army service and on the sacrifices made by his father, who was an Army captain and served in the Vietnam War, and by his grandfather, who was wounded in Iwo Jima during World War II.

“Lyrics are simply stories set to music,” said William, Sr. Entertainment Stage Manager. “We hope the audience will be moved to hear the words that have inspired so many veterans and families across the generations.”

As if creating their own rallying anthem, the theme “their story in song” unified Entertainment cast as they worked to reimagine the time-honored ceremony. Inspiration was drawn from special guest performances by the 1st Marine Division Band of Camp Pendleton, California, in which a vocalist performed alongside the band to lead the crowd in live singing of the Armed Forces anthems.

Supporting veteran and active-duty service members is a Disneyland tradition that goes back to founders Walt Disney and Roy Disney, who supported the nation during World War I (Roy in the U.S. Navy and Walt with the American Red Cross).  The Walt Disney Company has been recognized for supporting and hiring veterans over the years. Disney’s Heroes Work Here initiative has hired more than 11,000 veterans and military spouses since 2012 and the Disney’s Veterans Institute has helped hundreds of companies across the country establish veteran hiring programs of their own. Disneyland Resort cast members can find connections with other veterans or supporters of the U.S. Armed Forces by joining SALUTE, one of many Disneyland Resort business employee resource groups.

Guests can witness the enhanced ceremony honoring veterans and active-duty members of the U.S. armed forces daily on Main Street, US.A. before sunset. Dapper Dans will perform with the Disneyland Band Fridays through Tuesdays; Wednesdays and Thursdays will feature the Disneyland Band only.